This year, for the first time in several years, I didn’t go to Lollapalooza. The people I normally go with were exhausted by the heat and the lineup wasn’t that exciting. I am a heavy metal fan, but damn, Ozzy was old back when I saw him with Randy Rhodes (on TV) and that was about 25 or so years ago.

We went to see the Afghan Whigs at a Lollapalooza after-show at the Metro. The Afghan Whigs are fronted by Greg Dulli and he has had a great career, not only with the Afghan Whigs who hit it semi-big in the 1990’s but on his own. It was great to see him back in the spotlight again. 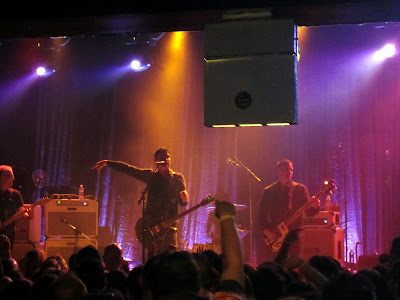 There was a DJ and an opening act and the Afghan Whigs didn’t go on until 12:15pm. But they went right on time at 12:15pm and sounded great. There was a horn section and their heavy groove with hard rock thrown in method was working.

I learned something else – I am too damn old for the Metro. That place was completely packed and you couldn’t see anything unless you wanted to push to the front and battle everyone in a sweatbox. I don’t know if it was oversold or it was always like that (my older memories of the Metro are faded) but there were people everywhere and I basically watched it from the hallway. You’d need to stand in line and rush to the stage and sit through the opening acts to see pretty much anything at all (literally) and, hey, forget that.

On another note Lollapalooza was a rain soaked mess on Saturday. They evacuated it and everyone apparently just poured out into the surrounding neighborhoods, as if that is some sort of “plan” (you’d want to go to shelter, right?) While we were in Wrigleyville checking out bars and waiting for the show we saw an immense stream of completely f’d up people covered in mud just screaming, howling and weaving around. It looked like some sort of mud bomb went off. There was even a guy passed out on the mailbox that his friends were trying to drag him away from (an inside joke for Dan).

If you are interested in the Afghan Whigs or Dulli’s solo work which I’d highly recommend some tracks to download are
– Gentlemen, Somethin’ Hot, 66, Dobonair, Miles Iz Ded, Honkey’s Ladder
– Teenage Wristband, Bonnie Brae, On the Corner (the Twilight Singers)
– Cigarettes (Greg Dulli)