I often see film crews working in Chicago. Here is a set with 50’s cars on the North branch of the Chicago River in the early evening. 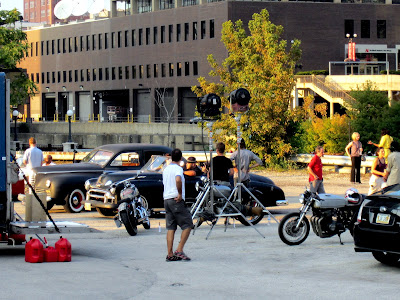 Steven Soderbergh, who has filmed many recent box office successes (including a few of my favorite films including “The Limey”) works as his own cinematographer and shoots on digital. He also works at a very fast pace, per this interview:

“Working fast enables you to be less precious and think only about what the movie wants as opposed to what you want — which can be different. ‘Magic Mike’ was made in 25 days. Fifteen years ago, I couldn’t have done that. ‘Sex, Lies and Videotape’ took 30 days. I could make that movie in 15 days now, and do it better too.

The budget for “Magic M*ke” (don’t want the traffic) was $7M. This movie was filmed in digital. A new movie “Side by Side” discusses the transition from analog to digital film making; apparently documentaries have been digital for years due to costs and ability to quickly set up a scene (analog is more cumbersome).

As someone who is interested in the economics of everything, it seems that if you can make a movie quickly and cheaply the relative profits would be immense. If someone like Soderbergh can get a movie done in 15 days on digital, and it doesn’t involve big special effects or giant set pieces, those sorts of movies should squeeze out the traditional opponents.

There is an aura of tradition, crafts and guilds surrounding the movie business, yet like music and books these traditions are being upended by new technologies. If the customer (movie-goer) can be satisfied with a cheaper product delivered more efficiently, those artifacts of a union age and vast sets and cadres can be left behind for a more streamlined and quick filming experience.

A studio that can harness the new breed of cost efficient and fast movie directors, using modern (cheap) technology, should be able to make more profits over time than their competitors, unless those competitors have structural advantages (sequels, rights to books on vampires or comic heroes) that can offset them. There could be a time when the rituals are cut away and movies are made on a rapid timeline with a small crew in an efficient fashion. This could allow for more offbeat films to be released to a niche audience, kind of the same way in which new cable channels like HBO and FX gave us a place for new, interesting series that aren’t aiming for broad laughs. They gave us “The Sopranos” and “Damages” as opposed to “According to Jim” which the main networks pushed.

All the trappings are expensive and un-economical. Like the fancy recording studio and equipment, which all went digital (on a laptop), the economics cannot be denied.

16 thoughts on “Films and Economics”