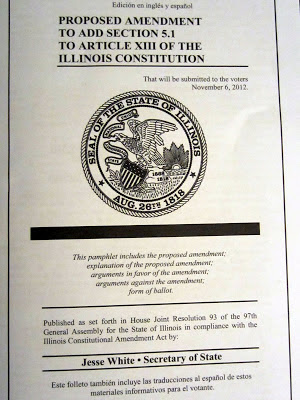 Recently I received a proposed amendment to the Illinois State Constitution in the mail. The purpose of the amendment is to require a 3/5 majority before pension increases can be passed for state employees.

In short, the amendment to the constitution is required because our elected representatives refuse to do any basic “governing”. Illinois recently implemented a massive tax increase (after all, that’s what “Blue State” governors usually do when they must choose between cutting state expenditures and raising revenues) on the revenue side of the ledger but kicked the can for the umpteenth year in a row for SERIOUS reform of our pension crisis in Illinois.

It made me reflect on the giant overhead and general incompetence of our state’s government. We have a state senate, house, a governor, and an amazing array of local authorities. According to this article, Illinois leads the nation in governmental entities, with almost 7000 of them.

On the other hand, the Onion summarized state and local government with a brilliant and pithy line.

We don’t want nobody nobody sent

6 thoughts on “The Onion On State Government”