In my time in India I was struck by how much obvious wealth was on display. We stayed in Gurgaon, which is one of the richest areas of India. Per wikipedia there are over 40 malls in Gurgaon, many of them brand new and built in a striking style and visible from the street. They also had multiple high end retailers including at least two Kohler stores and many other interior designers. 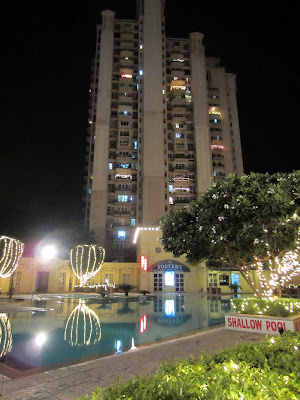 The cost of real estate is also astronomical, especially for what is considered to be a developing country. The condos in that building in Gurgaon in the photo above likely went for between $500k – $1M USD. There is a shortage of land on which to build and a second shortage of high end “western style” modern facilities, thus driving up the price on both. If you have a large stand alone house (likely passed down in your family) in a major city it can easily have a value greater than $1M USD.

In the past when India was under severe socialism and cut off from the West I remember photos of their obsolete cars that were produced for local consumption. Today on the streets (among the tuk tuks and often animals and scooters) you can see many modern autos made likely by local companies in partnership with major auto manufacturers – they are not obviously different from what you’d see in the West.

Even in Gurgaon you can’t really walk outside as you can in the West. You need a driver or a car to get anywhere. Part of this is due to the way the area was developed but another element is just that even in the richest area myriad people are continuously on the streets and you’d be endlessly hassled if you went out to take a jog or something. 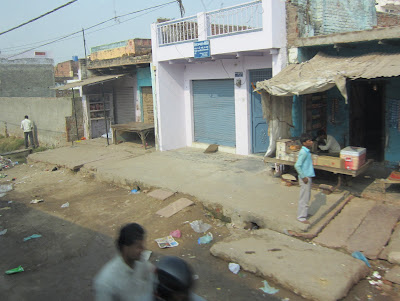 Then there is the rest of India. Since we didn’t seek out poverty we only saw what was available from the side of the road. There were many smaller towns and settlements, with businesses (usually selling snacks, mobiles, or car parts) set up in dilapidated buildings among other abandoned buildings. It is common for people just to urinate outside (like that guy in the corner of the photo) and many of the settlements looked like they had no proper sanitation or sewers and garbage was strewn about (although likely picked clean of anything of value).

You start to understand what Malthus was talking about when you see a tiny plot of land being farmed (often by hand) with a little hut without electricity (and I assume water, too) and then likely there are multiple children living with that family. That bit of land barely feeds who is there now, much less leaving much for multiple kids to inherit. The drive to leave and seek work elsewhere is always present as a result. I didn’t see it but someone we were with noted a woman having a child out on the street when we were passing by. That is the kind of eye opening thing you don’t see in the west.

In the richest areas of India you can live like you do in the West, albeit with many more servants and you can’t walk anywhere (need a driver). The prices, if anything, are higher than many areas of the West. As for the rest of India, you can see the great challenge they face with poverty.

3 thoughts on “India – The Rich and the Poor”