This post is an outsiders view of Chicago during the holiday season with a few photos and a video to boot. If you live there you might not gain a lot from it – on the other hand, you might get a few laughs.

For the second year in a row, I took the wife and kids to Chicago to spend a weekend enjoying the holiday season.

The drive in was predictably brutal, with the Kennedy stacked up from O Hare all the way to our destination. I don’t know if there is anything that is to be done anymore about the traffic. It made the beginning of the trip unpleasant, but it was expected so at least we weren’t surprised.

We stayed at the Talbott Hotel on Delaware street, which was a great location. The hotel itself was very cozy and quaint. The room was large enough where we could separate the kids from the adults. The room was a bit musty. Not sure if this was age or smoke from a by-gone era. It was mildly annoying but not too bad.

One of the things we did was stroll and shop.  The stores all along Michigan Avenue were absolutely packed.  This is a shot from inside Nordstrom Rack. The aisles were all pretty much like this the whole time we were there. I camped out with the kids while the wife worked the aisles over looking for deals on shoes. Note the sign that says “happy shoe hunting!”. 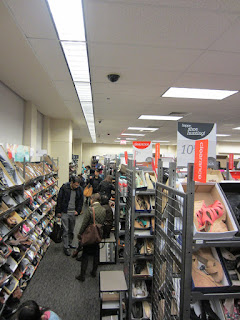 And hunt you could.  I wasn’t familiar with Nordstrom Rack, but they are apparently an outlet store for Nordstroms and you could get some screaming deals on shoes and other apparel if you were up for the hunt.  This pair of Jimmy Choo shoes was marked down from $695 to $229.97. 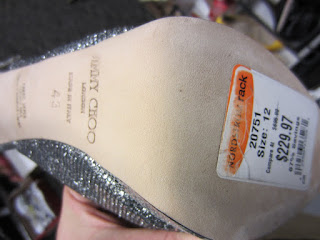 They had many other designer brands available such as Valentino, Prada and others.  I suppose if you are into this sort of thing you could outfit yourself pretty well with designer clothes for one third the price.  I think you would need to figure out the days when the new shipments come in so you could find your size as I am sure certain sizes sell out faster than others.  But if you like this sort of thing, it looked like a pretty good deal.

The streets were absolutely swarmed with people.  The weather was unseasonably warm (in the sixties in December !?) so that may have been part of it.  This picture of State Street does not do the crowds justice. 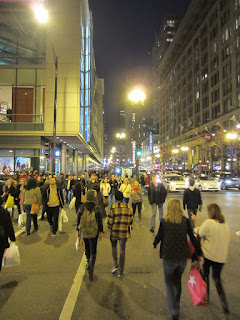 In that photo you can see Macy’s (the old Marshall Fields) on the right.  We wanted to take the kids to see the famous windows where they have animated displays every year, but it was all for naught.  It was literally impossible to get to the windows there were so many people there.  Earlier we went to the ChristKindleMarket and it was also impossible to enjoy, well, anything.  The crowd was immense and we just left.  You couldn’t even walk through the place.

Insice Macy’s, they had the traditional Christmas tree set up inside of the famous Walnut Room.  The wait was almost two hours to get a spot.  We took it because we had a bunch of shopping to do for our new domicile. 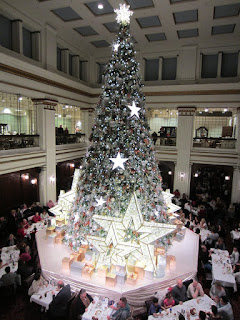 The food was good enough – by my best guess they were going to feed a few thousand people that night and in a situation like that I feel that you can’t expect too much.  The service was really awful.  I rarely tip below 20% but this woman got under 10 from me.  It was terrible.

We also hit the Museum of Science and Industry.  I hadn’t been there in a very long time (30 years?) and it was cool to see the exhibits.  The kids also enjoyed it.  But it is so immense, like the other museums, that eventually you get family fatigue and we had to go. 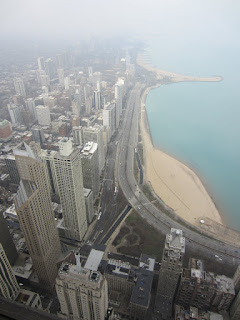 It was approaching noon and I knew that the Bears were playing.  I saw the fireworks coming from Soldier Field during the intros of the Bear players and was hoping to catch a flyover, and that I did.  This is a Stealth Bomber.  The video is best in the HD format.

All in all, we had a great time in Chicago. The crowds were absolutely immense – just from my anecdotal observations I would say that at least the retail economy in this part of the country is doing OK.

14 thoughts on “Chicago Photos and Anecdotal Observations Weekend of Dec. 1, 2012”