From time to time I have to report out on the insanity of the Rolling Stones lists and their fixation with Bob Dylan, the sixties, and other obscurities. Here I had to revise their top guitarist list which was comically irrelevant, as well as their equally terrible top guitar songs list. 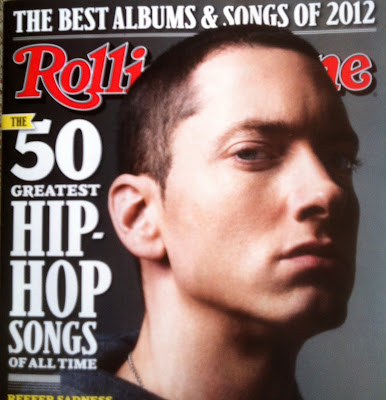 While I know hardly anything about hip hop relative to my knowledge of rock everyone knows that putting Eminem on the cover is a gaffe in that community. Even Eminem himself would probably cringe at being the face of hip hop, when you have icons like Jay-Z, Tupac, Biggie, Snoop, Dr Dre, and Kanye. Sure he’s the best white rapper alive but really…

Then onto the list. These songs are so old I even remember them.


It is hilarious that Rolling Stone put their “musty test” to rap just like they do to rock (Bob Dylan) and guitar (Jimi Hendrix). They are really saying that those first four songs that are 30 years old or even older are the best hip hop songs? They are definitely old and were pioneers but that isn’t the best. Fine I’ll agree with #5 but the first four gotta go.

Luckily the list is so laughably bad right from the top and with Eminem on the cover I don’t need to spend even five minutes thinking about it. This post basically wrote itself.

6 thoughts on “Rolling Stone is Laughable on Hip Hop List”