This is another installment from our friend Gerry over at LITGM who is in the “front lines” of the gun rights issue working for a major retailer.

It is becoming all too weary for me to tell customers “no”. As a major outdoor equipment retailer it must be frustrating to know how a great sales period that is usually slow could have been even greater if they had the product to sell. That said, our store and the entire chain is doing very well. Turkey season is approaching and all the necessary items are being bought at a brisk rate. Now it’s fishing’s turn and yesterday the customers who are fishermen came in for a special sales event. They were all buying new tackle in anticipation of the season.

At work the phone doesn’t stop beeping so we started playing a new game. Between us we call out a caliber we each predict that will be requested by the caller whenever the phone beeps. I usually go with .22. Paul likes 9mm while Don prefers 5.56 or .223. “Hello, hunting department, how may I help you?” is soon followed by a “no sir, we are all out of 9mm.” Paul quickly lets out a “woo-hoo I won!” No bets, just fun. Breaks the monotony of constantly saying no.

Not much new to report from the firearm front. There is no retreat, more of a cease fire mode, awaiting replenishment from the supply line. AR’s come in small numbers and are quickly snapped up. Same holds true for ammo. Each morning the same dozen or individuals so show up looking for their favorite calibers. These are the battle hardened. They know they’re unlikely to find what they want but they still arrive to look. Maybe, and occasionally when they show up we actually have meager replenishment for them. Then it’s Katy bar the door – soon it’s gone. It goes into basements, garages and some to the great aftermarket to be resold. My bet is not much is being used at the range right now. When asked how soon ammunition will return to full supply I repeat the same answer trying my best to appear positive instead of weary. When the entire nation’s supply of consumer ammunition is sold within three weeks it takes a long time for manufacturers to recover. That is the simple truth.

What I witnessed last week was astonishing. 62 cases of PMC .233 55 gr. FMJ disappeared within 36 hours. That is 62,000 rounds (1000 per case) packaged in boxes of 20 and with a limit of 10 boxes per customer sold out in our one store alone. The first wave of regulars came in and while packing their baskets were simultaneously calling friends to alert them to their find. About an hour or two later that larger second wave arrived. Late in the day the after work crowd came in to clean up the leftovers.

They tell me of their own conspiracy theories or those they discover on the internets. The one most interesting is that the government is intentionally buying enough ammo with the intent of keeping the civilian supply low. So I went to a close acquaintance who is with the FBI. I asked him if what I hear about government bureaus such as NOAA and the DCFS buying excessive quantities of ammunition is true and why they would need so much, as many customers have claimed.

He explained that all government bureaus have their own agents, investigators and security forces. All need to be armed and all need regular firearm training. Including the Armed Forces the government is the #1 buyer of ammunition and each year they buy more than the previous. Federal and local government law enforcement come first in the supply chain and the civilian supply comes last, as always. The G has not ordered any more ammo than they planned to purchase prior to recent events no matter what Alex Jones and other attention-seekers will have us believe. All they are looking for is a reason for the current shortages and the G is easy to blame especially for conspiracy nuts. He went on to explain that his bureau’s practice range vault of ammunition is now at half capacity and that is rare.

I have no reason to doubt his explanation.

After searching for nefarious reasons for the shortages out of curiosity along with speaking with many I respect I am now convinced the current condition has simply been caused by consumer supply and demand – nothing more. The free market can be our friend and at times it can be our enemy.

While searching for info here’s something that caught my attention. The following is said to have come from the Facebook page of a small supplier called Valley Guns in West Virginia. Representatives of Valley Guns were said to have attended a manufacturers meeting and gave this report. I could not find and/or verify any of this information.

For what it’s worth:

SMITH & WESSON:
Is running at Full capacity making 300+ guns/day-mainly M&P pistols.
They are unable to produce any more guns to help with the shortages.

DPMS:
Can’t get enough parts to produce any more product.

SPRINGFIELD ARMORY:
Only company who can meet demand but are running 30-45 days behind.

AMMO:
Every caliber is now allocated! We are looking at a nation wide shortage of all calibers over the next 9 months. All plants are producing as much ammo as possible with 1 BILLION rounds produced weekly. Most is military followed by L.E. and civilians are third in line.

MAGPUL:
Is behind 1 MILLION mags, do not expect any large quantities of magpul anytime soon.

RELOADERS:
ALL Remington, Winchester, CCI & Federal primers are going to ammo FIRST. There are no extra’s for reloading purposes… it could be 6-9 months before things get caught up. Sorry for the bleaknews, but now we know what to expect in the coming months. Stay tuned, we’ll keep you posted…

Related commentary:
They didn’t know when they’d be getting anything back in stock, from magazines to rifles to pistols. Manufacturers were running full-bore, but couldn’t come close to keeping up with market demand. It wasn’t just the AR-15s, the AK-pattern rifles, the M1As, and the FALs that were sold out. It really hit me when I realized that the World War-era M1 Garands, M1 carbines, and Enfield .303s were gone, along with every last shell. Ubiquitous Mosin-Nagants of which every gun store always seems to have 10-20 were gone. So was their ammo. Only a dust free space marked their passing. I’ve never seen anything like it. Every weapon of military utility designed within the past 100+ years was gone.

Barack Obama, Dianne Feinstein and the rest of the Statists have done
more to promote gun ownership than the NRA ever did. Well done, Democrats!

I could find nothing to backup this information. Also noted is the lack of a report from Winchester, PMC, Magtech, CCI, Federal and many other ammunition manufacturers on their production other than primers. Also absent are reports from Hornady, RCBS, Lee, Dillon and makers of reloading dies all of which are in very short supply. All in all it appears this shortage will last more than a few months.

In other news, Magpul, a company with HQ in Boulder CO (of all places) and manufacturers of the finest hi-cap mags along with other high quality accoutrements and furniture for the AR platform, is threatening to move out of Colorado if that state enacts proposed firearm bans. One individual I work with has sent PMAGS to both his Marine sons currently serving in Berzerkistan and the boys were always asking him to send more before the shortage. PMAG’s surpass the performance of steel MIL-SPEC mags issued by the Corps and are much more appreciated by active duty Marines than sending a Chicago Pizza, according to my friend John.
I like Magpul’s style. Here is one of their recent ads with early 50’s cold war imagery. Well done. 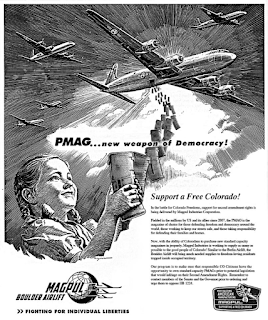 A gun show took place this weekend in Crown Point IN. Here’s a local news report. The money quote: “For the most part, the crowd was primarily white, male and older than 30. Some fathers had children in tow or in arms. Many were boomers and beyond.”

Don’t know about you but that sure sounds like a rowdy bunch of criminals to me. 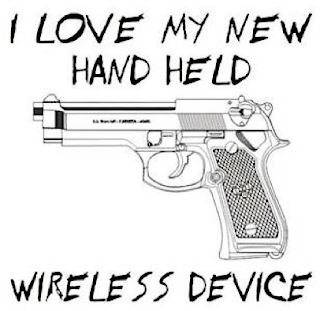