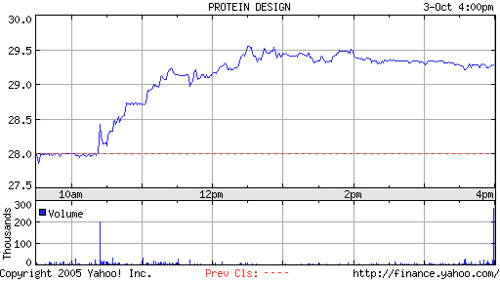 Do you see the flat part of PDLI’s chart on the left, oh around 10:20am EST? That’s when I sold my 600 shares of PDLI, missing out on $800 of gains. Hurts don’t it? The market has a particular knack for making one feel stupid. My original reaction is a bit less academically objective; more along the lines of “AAARRRRRRRRRGGGGHHHH”…

So as a public service to the Chicagoboyz, here is a lesson in what not to do in the market. (Don’t worry, there’s a happy ending)

To back up, I originally invested in PDLI due to a highly sophisticated screening method. I was frustrated at another position, Biogen (BIIB) sold at a loss, but wanted exposure to biotech, so jumped into PDLI. Deep eh? It was another “AAARRRRRRRRRGGGGHHHH” moment, but to a lesser scale. It was a stupid trade, which brings up a useful lesson:

1. Don’t get emotional in the stock market. Jonathan had a good quote from a famous trader “Losing your position is aggravating, losing your composure is fatal.”

So I rashly bought into PDLI at $29.50, and rode it down to $27-$28. Genius eh? PDLI was, however, already on my watch/buy list, so it wasn’t completely blind, but it sure did suck to buy a stock and have it go down immediately, and keep going down.

PDLI got onto my watch list through another highly sophisticated screening method. I read Motley Fool’s Rule Breakers newsletter, and thought, “hmmm… that looks pretty good”. As a plug, I highly recommend their newsletter. It’s free for 30 days, and they’ll give you a refund any time if you don’t like it. There are some good ideas in there. I used it to get quickly up to speed on the market, with trading ideas. And I think that’s the main value of any good information source, to get you up to speed on something you don’t understand. In this case, I smelled a bull market in biotech, and wanted exposure (ie make money). So I bought into PDLI, the thing bled until $27, and came back up to $28 as of this morning.

My original intent was to hold PDLI back to break even and then decide what to do with it. It’s a well run company. They have a good royalty business from licensing out their patent for humanizing mouse antibodies, which Genetech (DNA) used to good effect on their blockbuster drugs. PDLI gets 3% off the top. PDLI has some good drugs in the pipeline, and is a year ahead of schedule in getting to cash flow positive. All well and good right? That’s the cerebral part of the game. Trading is the animal instincts part of the game, and almost a separate game in its own right.

So I’m sitting with PDLI at $28 this morning. One of my other holdings, CV Therapeutics, came out with good news this morning for their primary drug Ranexa. Here were my main rationales for selling PDLI at the time:

a. PDLI hasn’t gone anywhere since I bought it (opportunity cost)
b. I wanted more shares of CVTX. CVTX was at a good entry point this morning of around $27.25 when I bought it.
c. I was already using a good chunk of margin, so wanted to fund the buy as oppose to taking out more margin
d. I am sitting on losses for PDLI. I have taxable income this year from working before starting law school, so can reduce my taxes with a realized tax loss

And sold I did. Literally minutes before the sucker took off. Jim Cramer has a good saying “I’d rather be lucky than good”, which in this case, drives it home even more. This isn’t the first time impatience got the better of me, and I’m sure it won’t be the last. Which leads to more useful lessons:

2. Be patient in the market place.

Taking a loss burns, and it burns even more when the thing shoots straight up after you sell it. My original thesis pegs PDLI at going to $35-$40 by year end. When you see a sold stock run, you will think of everything bad: It’s going straight to $40, someone is going to buy them out, they’re going to cure cancer tomorrow, etc, etc. The market is truly built on regrets. So to emphasize it more, don’t get emotional. Jonathan summed it up better than me:

Take loss, reevaluate if necessary, move on. Minimize hindsight
self-criticism once you have drawn whatever lesson you can from a
trade. It might be that you did the right thing even if you would have
made more money by holding. If yes, forget trade. If no, try to figure
out what to do better the next time, then forget trade. To quote
famous trader: Losing your position is aggravating, losing your
composure is fatal.

The good news is that CVTX went up as well after I bought it, although not as much. I made about $400 in moving to CVTX by the end of the day. It makes up for part of it, but it still bugs me to no end that I missed out on PDLI. Aagh…

And herein lies another huge irony of the market place. My biggest holding is Vertex Pharmaceuticals (VRTX). The stock has been on a rampage lately: 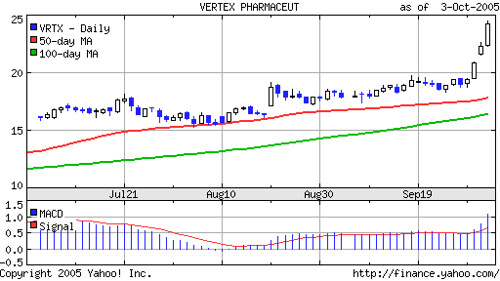