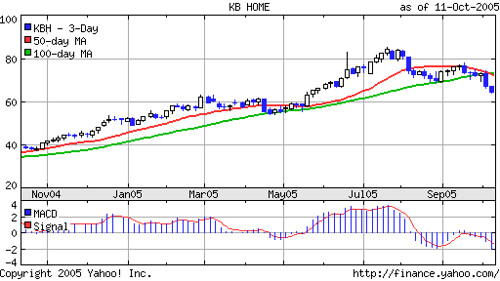 Here’s my latest trading idea: short the homebuilders. It’s not the most original idea – more like the pink elephant in the room – but where there’s opportunity, doesn’t hurt to coin it. I’m currently shorting KB Homes (KBH) and Toll Brothers (TOL). 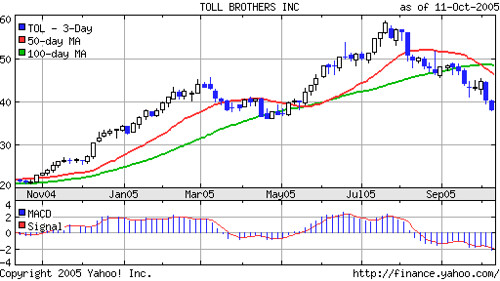 Stock and technical analysis wise, the group looks ugly. Both KBH and TOL’s charts are “broken”, ie their meteoric rise is over. They’ve broken through important moving averages and support. No need to go into details, the charts are pretty clear.

Rates are rising, and it looks like the housing market is finally slowing. Simple supply and demand, when inventories go up, prices come down. It will take a while for the housing market to play itself out. But the stock market usually anticipates these things faster, so I think the price decline in the homebuilder stocks will be faster than having to wait out the actual decline in home prices. Worst case scenario is the housing market implodes. If that happens, I think we will have many more things to worry about than trying to make a few bucks shorting stocks. It is what it is. Personally, I think the US economy is strong enough to withstand even that shock, but that’s a different discussion.

I think the homebuilders are making the same mistakes they made in the 1980’s, which is to take on a ton of debt based on the value of their inventory. Looking at KBH’s financials, a few things stood out. Cash flow from operations is negative $554 million for the 9 months YTD. They financed that through issuing $748 million in notes payable, ie debt. Based on those figures, they’re averaging operating cash burn of $2 million per day for the year, and around $2.6 million per day for the latest quarter, so cash burn is accelerating. Cash on hand at the end of Q3 is $60 million. I’m no expert in the homebuilding business, but this tells me they have to borrow more money to finance operations, which is not a good thing.

Mortgages & notes payable on the books at the end of Q3 is $2.7 billion. Total liabilities are around $4.5 billion. The cynic in me says half their market cap is debt.

Construction is obviously a capital intensive business, but something doesn’t smell right here.

I’m betting they are heading towards a cash crunch, or at least cash is getting expensive.

Insiders have dumped stock hand over fist the past year, especially this summer, which is telling in itself. If they don’t think it’s worth holding, why should outside investors.

So here are some main reasons from my hypothesis.

Update: I smell a rat. I don’t think there’s outright fraud yet. But usually with any booming sector – where the stock zooms from nothing to the stratosphere – there are those who will take advantage of it, either to milk more out of it or to keep it going. Think high tech or Enron. It would not surprise me if there turns out to be some bad apples in the barrel. A good indication of the temptation would be the massive insider selling.