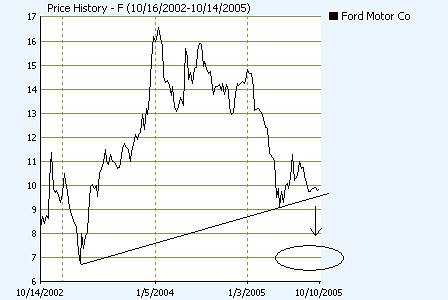 Up this week are Ford (F) and Dana (DCN). I’m shorting both. The main reasons were this article, and Citigroup’s downgrade of Ford.

Sales at No. 1 automaker General Motors Corp. were down 57 percent compared with early October 2004, while Ford Motor Co.’s sales were down 45 percent. The other seven major automakers also showed declines.

“The aftermath of the employee pricing programs is having a dramatic impact,” said Jeff Schuster, executive director of global forecasting at J.D. Power. “A lot could happen between now and the end of the month, but at this point, we’re on track for an October like we haven’t seen since the early 1990s.”

I’m guessing Citigroup is downgrading for the same reasons. Thestreet.com’s Gary Smith is arguing that technically Ford’s stock will not bottom until it hits the March 2003 lows in the mid to low $6 range. Ford stock’s intermediate bottom set in May has been broken. I’m betting that the Citigroup downgrade was an additional “punch” to break it lower.

Ford’s financing unit is keeping Ford profitable. But if auto sales plummet, you won’t need as much financing, and it will take the financing unit down with it.

Dana is a collateral play on Ford. The main reasons are:

Dana is having accounting problems. They admit weakness in their internal controls, and have withdrawn their earnings forecast for the remainder of 2005. When they have to write off $740 million in deferred tax assets, I’m betting there are more problems under the hood.

Visteon (VC) is to Ford what Delphi is to GM. Maybe not to the extent Delphi was, but Ford is propping up Visteon. I’m betting that Ford would rather send business to Visteon than any other. Dana’s sales are 25% to Ford, and 11% to GM.

Delphi is about to lower its costs dramatically. Its debt will be more or less wiped out, and the bankruptcy court will probably void its labor contracts. I’m betting that this will squeeze Dana and the other parts manufacturers. GM likewise has good reason to send business to Delphi as opposed to 3rd party parts manufacturers.

Deutsche Bank is negative on Dana, putting a rare “sell” rating on Dana. DB got it right with Delphi. I’m betting they’re getting it right with Dana.

The auto industry is quite similar to the airlines. They are saddled with unsustainable labor contracts, along with a commodity product affected by oil, and the added bonus of no one wanting their products without heavy discounting.

Ford reports its earnings for Q3 on Thursday. GM reports on Monday.

As a side note, I’ve closed out the Toll Brothers short and a third of the KB Homes short to finance the Ford and Dana shorts. Unlike newsletters, I have to work within the confines of limited capital. I still think the homebuilders are good short candidates, so am keeping the KBH short on. You can say I’m diversifying.