Some years ago Britain had a reputation for lousy food. Today, it may be the food capital of the world, with restaurants of every type as well as fresh seafood and other locally grown ingredients. I also think London has popularized the idea of “healthy” fast food with outlets like Pret a Manger which was the first franchise that I saw that prominently displayed calories and had excellent choices in ingredients and reasonable portions.

This photo of mushrooms was taken at a market on the South Bank where they had every kind of food imaginable. There were butchers, cheesemongers, beer and wine, and everything else. I was able to get a great pulled pork sandwich for 4 pounds there, so it seems that they are even borrowing good culinary ideas from the US south. 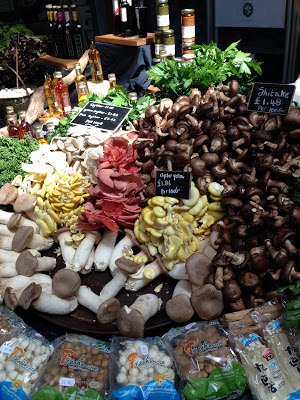 This photo makes me a bit sad. At Selfridges they have the “Foods of America” section with our insanely colored and artificial breakfast foods as well as pop tarts. I wanted to put a piece of tape over that title but it was certainly sad and true that we invented this dreck. 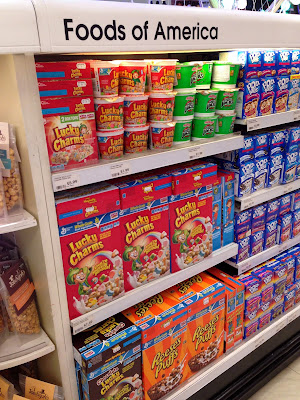 In London you need to drink faster because beer comes in a pint glass – which according to wikipedia is 20 ounces for the British unlike our 16 ounce pint in the US. Most US drinks come in 12 ounce sizes. Dan and I often trade photos of “beer synchronicity” where the glass and beer are in synch and here is a Kronenbourg 1664 (a French beer) in English pint size on a sunny afternoon on a picnic bench outside a pub. That’s the way to do it. 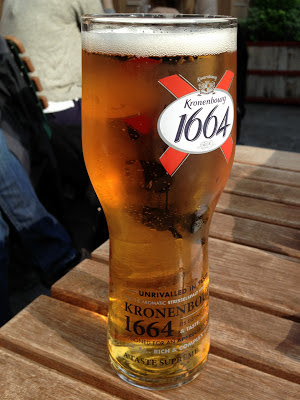 7 thoughts on “London Dining and Drinking”