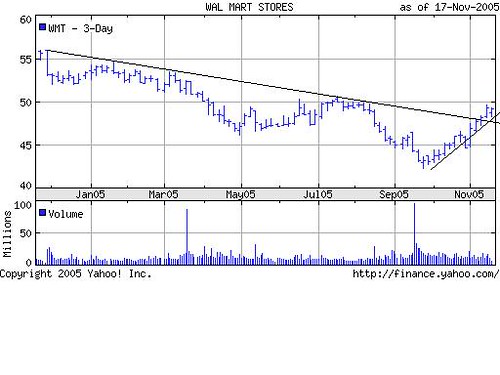 Why do I like the $47.50’s? The $50 calls are not in the money. So I’m really paying $1.90 for the privilege to WMT’s upside from now until March. But the initial outlay is lower per contract. With the $45 calls, I would be paying 90 cents for that privilege, but the intial outlay is much higher since it’s further in the money.

For me, it’s like buying a $3 tech stock with the upside potential of Nasdaq, backed by the steadiness of a Dow component.

Buyer beware: options are extremely risky. Do not construe any of the above as investment advice.

Update: It seems Warren Buffet thinks Walmart is a value here as well.

It’s nice to have validation from the most influential value investor. Even better is that he has a legion of investors who follow his lead.

Update 2: Wal-Mart’s Black Friday numbers are better than expected, and they forecast November same-store sales growth to be 4.3%. This number is without new stores and former Wal-Marts converted to Wal-Mart Supercenters. It’s looking like a merry Christmas indeed.