Dan and I went to Lollapalooza for the Friday, August 2nd show. We primarily went to see Nine Inch Nails who headlined on the North Stage late Friday night.

I saw NIN at Lollapalooza a few years ago and frankly, the show sucked. I am a big NIN fan and I came away seriously disappointed, especially since Kanye was tearing it up on the other side of the festival. The crowd was dead, the volume was low, they seemed to choose a strange mix of songs, and the light show was boring. 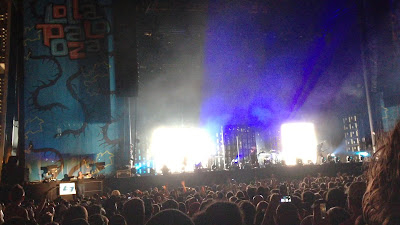 This time NIN put on a great show, with a huge light show, and an awesome sounding band. I was very impressed. Also note the “sign language interpreter” on the lower left. They have these ASL interpreters at many festivals now and they are fun to watch and really seem to get into the music. You can see her dance and move with “The Hand That Feeds” in the short video here. I wanted to see what she was going to do for the notorious song “Closer” but this is more family friendly.

4 thoughts on “NIN At Lollapalooza And Sign Language Interpreter”