When I go out of the house for a walk, uncertain as yet whither I will bend my steps, and submit myself to my instinct to decide for me, I find, strange and whimsical as it may seem, That I finally and inevitably settle southwest, toward some particular meadow or deserted pasture or hill in that direction.

The future lies that way for me and the earth seems more unexhausted and richer on that side. The outline which would bound my walks would be, not a circle, but a parabola, or rather like one of those cometary orbits which have been thought to be non-returning curves, in this case opening westward, in which my house occupies the place of the sun. I turn round and round irresolute sometimes for a quarter of an hour, until I decide, for the thousandth time, that will walk into the west or southwest. Eastward I go only by force; but westward I go free.

Thither no business leads me. It is hard for me to believe I shall find fair landscapes or sufficient wilderness and freedom behind the eastern horizon. I am not excited by the prospect of a walk thither; but I believe that the forest which I see in the western horizon stretches uninterruptedly towards the setting sun, and there are no towns nor cities in it of enough consequence to disturb me.

Let me live where I will, on this side is the city, on that the wilderness; and ever I am leaving the city more and more and withdrawing into the wilderness. I should not lay so much stress on this fact if I did not believe that something like this is the prevailing tendency of my countrymen. I must walk toward Oregon, and not toward Europe.

At the time this was written, the United States had only just won the Mexican War bringing the territory that is Arizona, New Mexico and California under it’s dominion. The long simmering dispute with Great Britain over Oregon had been settled in 1846, extending the existing borders across that territory and dividing it from British Columbia. The city of Salt Lake was being founded in Utah by the Mormons who’d been led there through rough and untamed wilderness by Brigham Young. 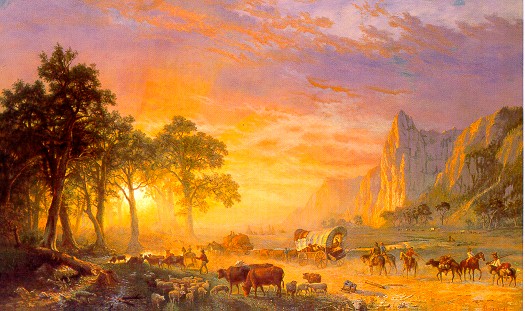 The pioneers were moving westward in droves along the Oregon Trail, which started in Independence Missouri, paralleled the Platte river, crossed over the Rockies north of Fort Laramie then paralleled the Snake and Columbia rivers into the Northwest Territory. Others followed the Sante Fe Trail across the Arkansas river and onward over the Sangre De Cristo mountains. Others still followed the Oregon trail as far as Fort Hall, then headed due west along the California trail.

If I could choose to live at any place and time, I would choose then and there. To travel though the western wilderness to a new life, a new beginning, when the world was young and new and fresh. I don’t belittle the hardship and danger. Yet, it would be the experience of a lifetime.