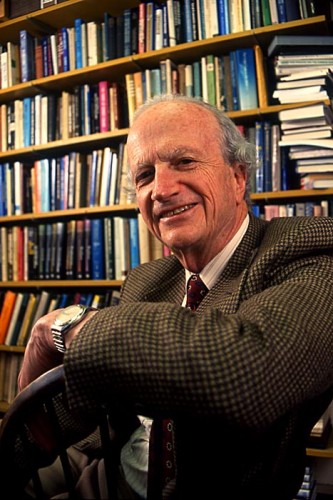 With the recent Nobel award to UChicago economists, it is good to be reminded of spirit of Chicago economics, and why it keeps producing Nobel Prize winners.

A friend who is a UChicago economics professor, who was a PhD student at the time, witnessed the following episode.

Gary Becker ran the Applications of Economics workshop in the Department of Economics for decades. This workshop was legendary as Ground Zero for tough microeconomics workshops. Frequent attendees included George Stigler, Ted Schultz, Sherwin Rosen, Kevin Murphy, Eddie Lazear, Bob Lucas & more. In addition, many PhD students (including myself) attended. That’s where we learned how to do research & think critically.

In the late 1980s (probably 1988), Asser Lindbeck came to present a paper he was working on. At the time Lindbeck chaired the Nobel Prize selection committee, & Gary was the #1 choice in the betting pools to receive the Nobel next. He did in fact win in 1992.

Lindbeck sent paper #1 ahead of coming to Chicago. As was the culture of the workshop, attendees had read it & were prepared to discuss the paper. As always, Gary showed up with a couple of questions scribbled on the front of his copy of Lindbeck paper #1.

Unfortunately, Lindbeck had sent the wrong paper. He arrived prepared to present paper #2. At the start of the workshop, he announced that he would not take any questions for the first 20 minutes, while he presented paper #2, & then he would open it up for discussion.
Gary immediately replied, “No, we prepared the paper that you sent, & that’s what we will discuss.” Lindbeck had a stubborn personality & replied, “No, I will present #2 & that’s what we will discuss,” & proceeded.

Gary interrupted again with another question about #1. Lindbeck tried to stop him. This continued for a couple of minutes until Lindbeck relented & we discussed paper #1. A vigorous & constructive discussion then followed (since the audience was prepared).

Watching this as a PhD student was frightening & inspiring. Gary was fearless. He clearly was not interested in playing Nobel politics, but only in running his workshop with the highest of standards. His expectation was that we all read the paper & arrived prepared, that the presenter had high standards, & that the discussion was vigorous, rigorous & thoughtful.

I never forgot this lesson from Gary Becker in what is most important at Chicago: Economics.

May it always be so.