The political left is trying very hard as can be seen here. 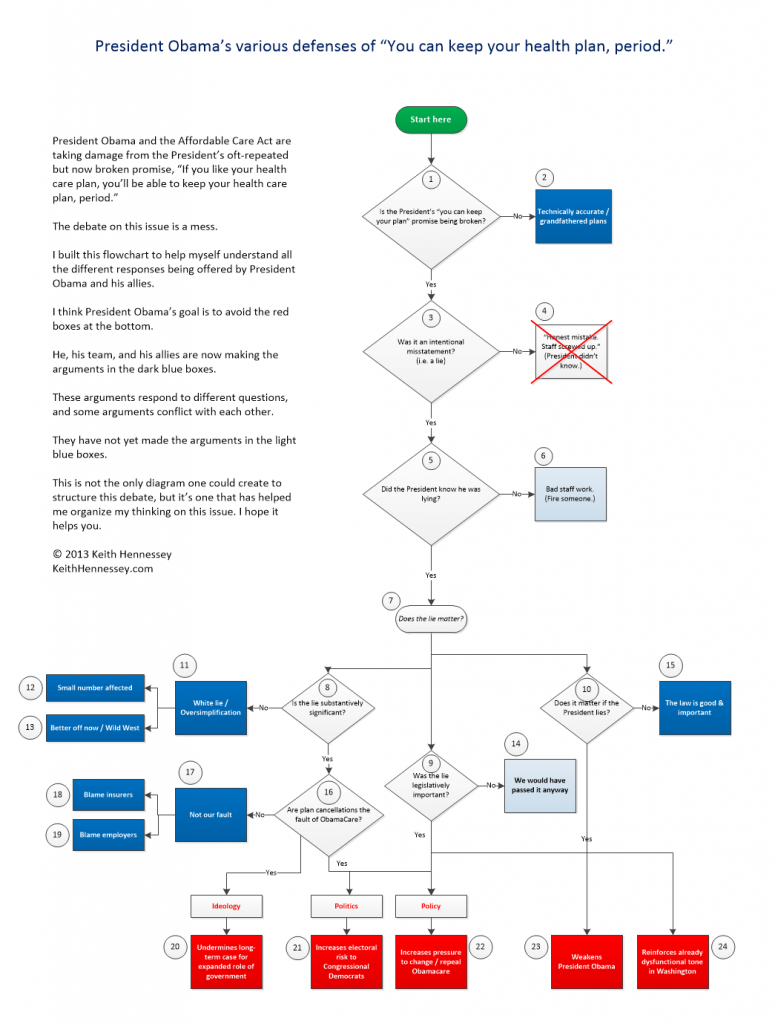 It’s kind of complicated so I will summarize. You are screwed !

There are accusations that insurance companies are using this to drop high risk subscribers. Maybe that is true but it is the consequence of ignorant people designing Obamacare. Did these guys ever set up a new business ? As Casey Stengel once said to the Mets , “”Can’t anybody here play this game?”

The New York Times has done what it can.

We are also told that “in all the furor, people forget how terrible many of the soon-to-be-abandoned policies were. Some had deductibles as high as $10,000 or $25,000 and required large co-pays after that, and some didn’t cover hospital care.” Never mind that we have seen cancellations of insurance policies with deductibles much lower, and customers forced to purchase replacement policies with higher deductibles, and with premium increases of 100%, if not higher.

Then there is this argument.

Why can’t people opt out of mental health coverage if there is not a reasonable chance that they will need that coverage? Why can’t they get mental health coverage when it is needed? After all, pre-existing conditions can no longer be denied, so in the event that mental health coverage is needed down the line, it can be obtained and the insurance companies cannot deny people who already have pre-existing mental health conditions. The Times assures us that over-coverage–and the high premiums that come with it–is “one price of moving toward universal coverage with comprehensive benefits.” They don’t explain why having unnecessary coverage is a step towards social justice, but as we saw from the beginning of this intelligence-insulting, repulsively dishonest op-ed, the New York Times is less about explaining, and more about covering up a disastrous rollout with disastrous policy consequences for the country.

Peggy Noonan, who has frustrated me with her obtuseness at times, gets it now.

Politically where are we right now, at this moment?

We have a huge piece of U.S. economic and social change that debuted a month ago as a program. The program dealt with something personal, even intimate: your health, the care of your body, the medicines you choose to take or procedures you get. It was hugely controversial from day one. It took all the political oxygen from the room. It failed to garner even one vote from the opposition when it was passed. It gave rise to a significant opposition movement, the town hall uprisings, which later produced the tea party. It caused unrest. In fact, it seemed not to answer a problem but cause it. I called ObamaCare, at the time of its passage, a catastrophic victory—one won at too great cost, with too much political bloodshed, and at the end what would you get? Barren terrain. A thing not worth fighting for.

So the program debuts and it’s a resounding, famous, fantastical flop. The first weeks of the news coverage are about how the websites don’t work, can you believe we paid for this, do you believe they had more than three years and produced this public joke of a program, this embarrassment?

She assumed that it wasn’t worth it if it worked !

The problem now is not the delivery system of the program, it’s the program itself. Not the computer screen but what’s inside the program. This is something you can’t get the IT guy in to fix.

This is the worst that could be imagined.

ObamaCare is a practical, policy and political disaster, a parlay of poisonous P’s.

And it is unbelievable – simply unbelievable – that the administration is so proud, so childish, so ideological, so ignorant and so uncaring about the bill’s victims that they refuse to stop, delay, go back, redraw and ease the trauma.

Two closing notes. In my lifetime the good word liberal was discarded by the Democratic Party. Over the decades they’d run it into the ground and changed it from a plus to a minus. Liberal came to suggest a whole world of bad ideas—soft on crime, eager for gun confiscation, big taxing. So the past 20 years Democrats tried to change their label, and in the Obama era it was finally definitively changed. They were now progressives.

Well, the biggest piece of progressive legislation in our lifetimes—not just costly but intrusive, abusive, and marked by a command-and-control mentality—is ObamaCare.

What happens now ? Richard Fernandez has some comments.

WASHINGTON — President Obama was assured that the healthcare insurance website was ready to launch on Oct. 1, even as private contractors and some administration officials knew the site had failed in early testing, a senior White House adviser said Sunday.

Obama aide Dan Pfeiffer said the president repeatedly asked about the healthcare.gov website, a key piece of his 2010 healthcare overhaul legislation, and was told it would meet his expectations.

Along with the president, Pfeiffer hyped the website in the weeks before the troubled launch, promising it would “be a consumer experience unmatched by anything in government, but also in the private sector.”

The system had been in free fall for three years, but nobody wanted to listen. “Three years ago, a trusted Obama health care adviser warned the White House it was losing control of Obamacare. A memo obtained by CBS News said strong leadership was missing and the law’s successful implementation was in jeopardy. The warnings were specific and dire — and ignored.”

David Cutler, who worked on the Obama 2008 campaign and was a valued outside health care consultant wrote this blunt memo to top White House economic adviser Larry Summers in May 2010: “I do not believe the relevant members of the administration understand the president’s vision or have the capability to carry it out.”

Cutler wrote no one was in charge who had any experience in complex business start-ups. He also worried basic regulations, technology and policy coordination would fail.

The employer mandate is set to go into effect next October, one month before the 2014 election. Pfeiffer, of course, is the brilliant Obama adviser who attacked a cancer victim critical of the Obamacare debacle. Joe the Plumber must understand how she feels. Pfeiffer was absolutely correct about the “experience.”

Now what ? I honestly don’t know. It feels a bit like France in 1940. Now what do we do? This is how an unfolding disaster in public policy feels. Peggy Noonan again:

Maybe they [ the GOP ] could even call in some people from the White House and Congress, the ones who helped write and interpret this famous law that you had to pass before you could know what was in it, and ask: “Did you ever meet a normal human? Did you understand what you were doing when you produced this thing?”

Maybe they could even ask the president: “In your entire life, from community organizer to lawyer to politician, did you ever buy an insurance policy? Were you always on your wife’s plan, or immediately put on a plush government plan? Did you ever have to do anything like what you’re telling the people of your country to do?”

20 thoughts on “A rolling catastrophe”