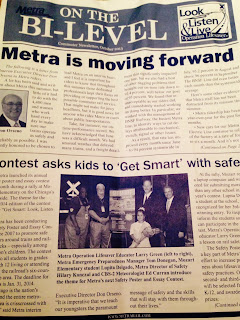 Recently I was riding on the Metra, the commuter rail system that connects the suburbs to downtown Chicago.  I picked up “On the Bi-Level”, the flyer that Metra management makes available to riders and was browsing through it when I came upon this innocuous sounding statement:

I certainly will not argue that Metra is without challenges.  Perhaps the biggest challenge, and one that will impact many of our plans, is our needs for more capital money to invest in our system.  We estimate Metra will need about $9.7 billion over the next decade to achieve a state of good repair on the system, and we expect to receive about a fourth of that amount from traditional federal and state sources.  Riders need to understand that fares help us cover our operating costs but have never been a significant source for capital expenses – we must rely on Washington and Springfield for that funding.

Within the utility community there is a concept called “generation equity”.  This implies that you need to spread the burden of replacement and renovation across the life cycle of users, rather than hitting them all on the first riders, such as in the case of a train line.  On the other hand, you cannot just ignore ongoing capital costs and let the system run into ruin by paying the minimal upkeep costs every year.


In this article, Metra lays bare the facts that:

In fact, it would be impossible for Metra to re-build the train lines that they have today in the current regulatory and legal environment.  Permits, lawyers, litigation, politically favored contractors, and a welter of archaic tools and practices would make the costs impossibly high and the deadlines incredibly long.  By “capital” costs, they are generally talking about replacing bridges, stations and sections of existing track rather than “true” expansion, although they do occasionally add some incremental lines or stations.

It is important to understand that things have gotten more EXPENSIVE but they haven’t gotten BETTER.  The infrastructure that we take for granted might as well have been built by the ancient Egyptians given how herculean the task would be to replace them.  Americans will never see another major dam built in the USA and likely few to no additional incremental nuclear or coal plants in the next 25 years.  Even major transmission lines are going to be few and far between, which will only be built because it is absolutely necessary to get electricity to new population centers.  This is all due to the layers of process and regulations and lawyers that we have overlaid atop the simplest tasks, and you can see the contrast when you go to China and see cities being built overnight.

At some point we are either going to need to radically re-structure how we build and pay for things or go to a completely private system where you pay for what you receive in terms of capacity, reliability and performance.  States and cities that make it impossibly expensive to build and expand will inevitably suffer relative to other locations that are freer in terms of rules and regulations, unless (as is likely) the entire US is burdened with Federal regulations that make it impossible to escape this yoke.