Divvy bikes came to Chicago this year towards the end of the summer and they seem to be a big hit. We see people riding Divvy bikes all the time and they have a distinctive “flash” light on the front (like a strobe) that is visible from far away, even from our condominium high up over River North.

I often walk near the train station and I noticed the Divvy van loading up bikes when the obvious hit me; Divvy bikes came from all over the city and ended up near the train station. These vans were redistributing the bikes back to other stations so that the next days’ rush hour could repeat the process. 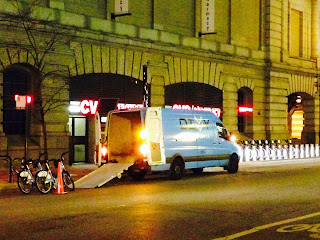 The stations seem to have a solar powered panel; they should connect each of the bikes to a sensor and then broadcast to a central station so that they can map out bike usage in regular intervals and use this information to improve their bike distribution algorithm. I assume that they can also make some stations larger than others; this way you could collect many bikes downtown and then redistribute them to stations that they came from (presumably on the north side) during the day. Here is an article I found about the Divvy “Rebalancers“.

Perhaps some day they could alter pricing in some sort of “congestion” model to charge people more who drop bikes off at popular stations and charge people less to ride those same bikes in the opposite direction to less popular stations. This could supplement the “rebalancers” with market forces. Grist for an MBA case study perhaps? 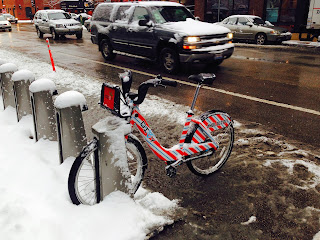 All of the Divvy bikes are blue but they had a red bike that you could track on twitter and encouraged people to take photos of it throughout the day. This is that same “single” bike, dressed up in Holiday finery.

4 thoughts on “Divvy Bikes and Logistics”