The United States Postal Service (USPS) is in bad financial shape. The service is currently losing money and is unable to pay some required payments to the government for employee retirement benefits. While the USPS has retained its first class mail monopoly, it sends only a small percentage the ecommerce packages that are the backbone of the physical internet economy. 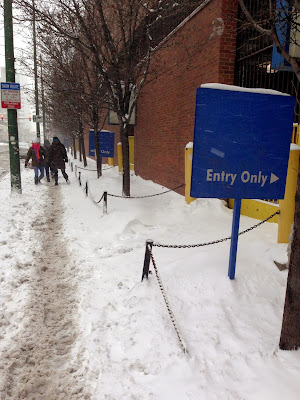 The real failure of the postal service, however, is encapsulated in the photo above. In our River North neighborhood, where the population density is high (local residents in high rise condominiums plus innumerable tourists) and the value of real estate is high, too, there is one institution that you can count on to not shovel their sidewalk or take care of their property. The US Postal Service.

The employees of the USPS are unionized and likely no one has the job of shoveling the sidewalk, or it isn’t in their job description. Thus it isn’t shoveled, and you need to trudge through it which becomes treacherous as the snow melts and re-freezes. Since many of the people who actually might want to use the postal service in this area are elderly, the dangerous sidewalks are even harder to defend.

They also used to have two mailboxes in the “drive up” section where you can pull your car up to the curb in front of the River North post office. Recently when I attempted to mail Christmas cards (we don’t like to leave them with the mailman in our condominium building because we’ve heard horror stories) at the post office, I couldn’t stuff them into the mailbox, because they reduced capacity down to a single mailbox. There were a few other potential customers milling around fuming as well, since the outdoor mailbox had apparently been jammed beyond capacity for some time.

The difficulty with the USPS is that unionization and inability to react to market forces and plan for disruptive technologies ensures that they will not find innovative ways to make money and remain a viable institution. It is unfair to summarize that the people at the post office are lazy or inflexible; the point is that their institutional culture and mission dooms them to failure. In a privately run business, a local manager would ensure that the sidewalks were passable and that customers would not stand fuming outside the door because during a time of peak need, capacity had been pulled away.

The USPS has substantial assets that it could call upon in its (theoretical) reinvention, including a vast door-to-door distribution network, valuable real-estate that could be sold or leveraged (this building in River North covers an entire block and must be worth between $50M – $100M), and a large work force that could potentially be utilized for additional revenue generating services (such as selling banking or telecom products). Mail services in Europe have been successfully privatized and yet they continue to deliver their “core” mission.

However, the USPS generally falls back onto their usual “monopoly” strategies, including 1) leveraging their local congressman to ensure that facilities are not reduced in their district 2) touting how they pay above-average wages and benefits and provide a “middle class” lifestyle to their workers 3) touting the “one rate anywhere” nature of the US mail service, meaning that you can send a letter from Barrow, Alaska to a small town in Florida for the same rate as sending to someone in your own home town 4) using “attrition” as a strategy where when individuals retire (usually before 65), their job is not replaced or reducing key services such as shutting Saturday mail delivery to save money.

The USPS had many opportunities to rebuild itself – they could have developed an “official” email address and process for governmental benefits and services, they could have led the enormous package revolution that was tied to e-commerce, and they could have found a way to leverage their distribution and local retail sales forces into adjacent products or government benefits. Instead, they made marginal efficiency improvements and continued with their “regulatory / monopoly” strategies listed above.

The failure to shovel sidewalks in a major urban area and to plan for minimal items related to customer convenience is emblematic of the “not my job” monopolistic / governmental thinking that permeates this entire institution from top to bottom, and combined with their “regulatory” strategy of not shutting individual non-economic components of their operations, ensures a slow to rapid bleed to death of the USPS in its current form.