An important event in my household is the spring planting of everything that is going into our garden on the balcony of our condo. They are grown inside under a grow light (mostly, except for items like lettuce and carrots) and then they get put outside.

The tomato plants grow by leaps and bounds! So what is used every day to keep up with their vigor? Why my old books, of course. 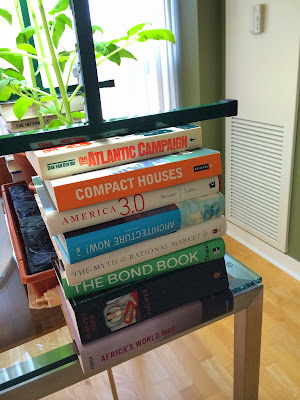 There you can see the usual suspects on my nightstand… some WW2 (Van Der Vat is a great author), of course America 3.0 by our good friend Michael Lotus, and “Africa’s World War” on the Congo. Then you have a couple of architecture books and finance books like the classsic “The Myth of the Rational Market”.

I’ve switched over (mostly) to the kindle now and haven’t been buying new books in hardcover. I bought a book on New Yorker cartoons in hardcover since I figured that would be the type of coffee table book that people might actually pick up and look at. I also might buy an occasional architecture or infographic book in softcover or used, as well. But that’s about it.

I really miss bookstores. I used to spend hours in bookstores, looking at various random and obscure books. Those are almost all dead, now. The bookstores that remain in malls and airports are often full of just bestsellers and random junk, with the back catalog gone. Since the back catalog was what I cared about, these “shell” bookstores are worse than useless.

Lately I have been trying to read more books and less junk on the internet. It is easy to buy a new book when it comes out right away and start reading. I read “Flash Boys” the day it came out and some of Thomas Piketty (I’m trying) and then a few other ones as well. I need to learn to focus on something that is longer than 15 minutes, which seems to be my remaining time span, with the distractions of work, email, and the Internet.

I grew up working in a bookstore, a Kroch’s and Brentanos in the Chicago suburbs. It was a good bookstore, and the other workers were aspiring writers and generally interesting people. I remember unpacking the books every day and putting them on shelves, and re-arranging them at the end of the day. We also “stripped” the covers off paperbacks and sent the covers back for paperbacks that didn’t sell rather than waste money on shipping.

When I went into the bookstore I wanted to be a writer, but soon gave up when I realized what people actually spent money to read. All of my favorite books had dusty book jackets while the diet books, horoscope books, and other junk flew off the shelves. Anything I viewed as interesting or literature just sat there, by contrast. It was a window into the harsh reality of the book business.

While I will keep these books to hold up the plants, I won’t be adding any more. And over time even this collection will whittle away to nothing, while I accumulate them in Amazon (when I say Kindle I usually read them all on my iPad, sometimes my Mac). Just like my CD’s and DVD’s, they will be gone, an inefficient medium when the cloud is absolutely infinite.

What this means for authors – I don’t know. I think that they still need to go around to promote their books, perhaps in coffeehouses and bars or theaters if they are big enough. I’ve seen David Sedaris a couple of times, and he puts on a great show, but he would be a high bar for most authors to reach. Like musicians, the authors are going to need to find new avenues of money to survive, because printed books are on a rapidly accelerating death spiral.

When books begin to get pirated (frankly I can’t believe it hasn’t happened already) then I don’t know what authors will do, at all. It probably won’t be a sustainable profession. Maybe it will become a profession of hobbyists and people jockeying to write the next script that will be turned into a movie or TV show.

To some extent, serious blogging can pick up some of the slack, and bloggers can organize long pieces into an ebook. The blogging service “medium” is also looking to support longer pieces, as well. Whether this really matters or not, I don’t know.

One thing for certain is that the big publishing houses, with their PR machines and large buildings and cash advances will at some point die out or be diminished shells, unless somehow they can get a cut of the next big franchise or script writing earnings. The one piece of this entire puzzle that will be missed most by the end user is the editor, since pretty much everything that is written down (such as this meandering blog piece) could use a good editor. Frankly, if I was ambitious enough I’d re-write this entire post into a coherent message, but I won’t. Because I’ve got to go…