As I mentioned in an earlier post, I recently had the great good fortune to make a presentation in Paris to the AFEA (The French Association for American Studies, Association Française d’Études Américaines, at the invitation of Jérôme Noirot, of the Ecole Centrale, Lyon. My presentation was entitled “America 3.0, Decentralization and the Tenth Amendment.” I have just learned paper of that title, coauthored by myself and James C. Bennett, will be included (in English) in a book to be published later this year. There may also be opportunities for future travel to France, which would be excellent.

While I was in Paris, I had the opportunity to meet with Emmanuel Todd, whose work was fundamental to the analysis we applied to American life, past present and future, in America 3.0. Our entire discussion in the book is highly “Toddean” as we understood it. (Our other major influence is the work of Alan Macfarlane.) Specifically, we base our understanding of American culture in large measure on Todd’s description of the Absolute Nuclear Family (ANF), which is the main Anglo-American family type.

I wrote to Todd last Fall, to ask him if he wanted a copy of the America 3.0. He told me he already had it, and planned to read it. However, over six months had gone by and I had heard nothing. Of course, my worry was that we had in some way misapplied or misunderstood his methodology. When I confirmed that I would be traveling to Paris, I contacted him again and asked if we could meet in person, and he agreed.

When we met, at a cafe near where I was staying, Todd stood up, shook my hand, said “bon jour”, sat down and immediately launched into a rapid fire conversation with no preliminary chit chat. (When the waiter asked us what we wanted, I asked for a café crème, and Todd without looking at him, with a dismissive wave said, “deux café crème!” — as if he was saying: Coffee is not important, we have important matters to discuss!) It was clear that Todd is a man of intense intellectual seriousness. It was as if we had been in the midst of a conversation already and were picking it up in the middle, which in a sense we had been, via our books. This reminded me, in a good way, of the intellectually intense atmosphere at the University of Chicago, where I was an undergraduate.

Todd had a copy of America 3.0 on the table, and he held it up and flipped through it and showed me it was full of underlining and notes. He said, “as you can see, I have read your book carefully.” He assured me that from a technical standpoint we had used his work accurately. He correctly understood that this was a concern, and I was glad to hear it.

Our conversation lasted about two hours, and we covered a lot of territory, mostly regarding Todd’s recent books and the work he is currently engaged in. I generated a lengthy memorandum following the meeting, to preserve my recollection, yet I am sure I failed to capture everything.

I will here mention one topic we discussed, to give a flavor of the conversation.

Todd spoke about the origins of the Absolute Nuclear Family, as contrasted with the Community Family which predominates in much of Eurasia. Todd said that his most recent book, L’Origine des systemes familiaux he shows that the entire history of the world is understood backward. Specifically, the supposedly most backward places are the most advanced. He told me that he had made an absurd mistake in his early book The Explanation of Ideology: Family Structure and Social Systems. He said in Explanation that the distribution of family systems appeared to be random. But, he said, he should have realized that this could not be correct. He took out a pile of printer paper and with rapid strokes sketched an oval and filled in the center, noting that this was the community family area. It was a given that I understood that the oval was Eurasia. He then marked Xs around the periphery for England, Iceland, Finland, France, Japan, Korea, the Philippines all areas which were still individualistic in family structure. He said the book articulates the “Principle of Peripheral Conservation.” The oldest known family structure is the Undifferentiated Nuclear Family (UNF). In England the UNF evolved into the ANF over many centuries. The Community Family forms took four to five thousand years to form and to reach their current state of development. In particular the subjugation of women took a very long time to complete in these systems. In other words, the societies which are currently considered the most modern have as a foundation an archaic family structure.

Here is the sketch:

Todd noted that he has recently determined that he needs to focus on understanding the United States, and that he is writing an essay that will include references to America 3.0. This is, of course, gratifying, and Jim Bennett are eager to see what he will have to say.

This conversation strengthened my belief in the accuracy and importance of what Jim Bennett and I have added to the historical and policy conversation with America 3.0.

I look forward to future discussions with Emmanuel Todd.

The following map and two tables help clarify the post above.

The map and the first table above are from TestingTodd: global data on family characteristics, by Auke Rijpma and Sarah Carmichael, Utrecht University (2013). The second table is from Development versus Legacy: The Relative Role of Development and Historical Legacies in Achieving Gender Equality (working paper), by Selin Dilli, Auke Rijpma and Sarah Carmichael (2013).

This map shows the distribution of family types: 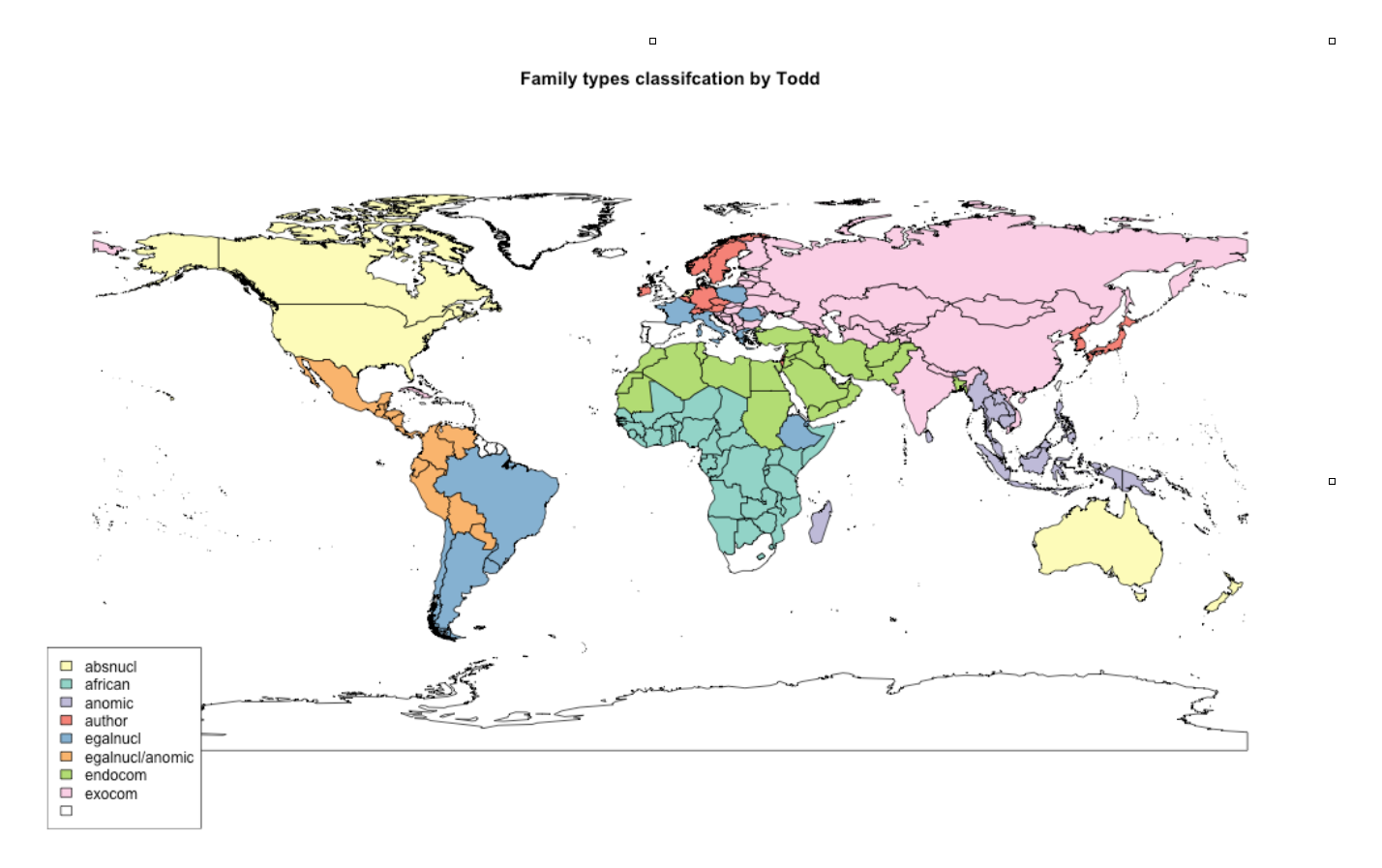 The definitions of Todd’s family types are included on these two tables: 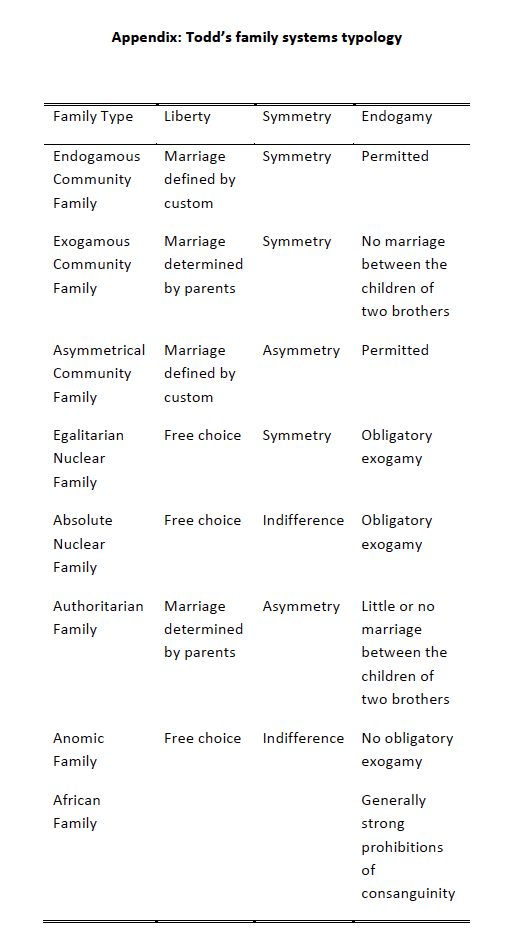 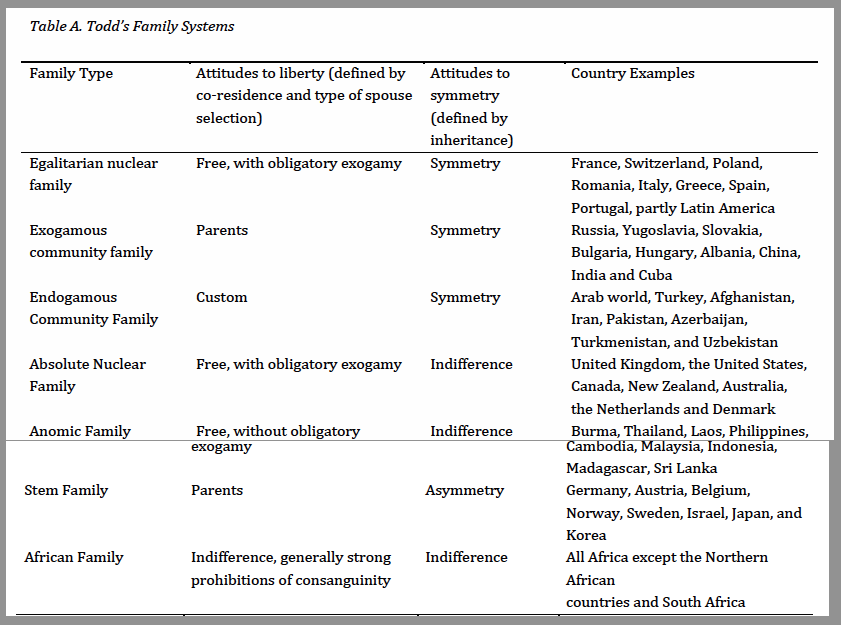