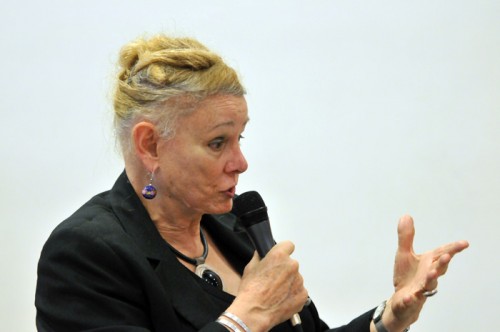 She was promoting her book Bourgeois Dignity: Why Economics Can’t Explain the Modern World

which is the second in a trilogy with The Bourgeois Virtues: Ethics for an Age of Commerce

. She announced last night that she just finished the third volume.

This essay, entitled The Great Enrichment Came and Comes from Ethics and Rhetoric gives some insight into her ideas.

THE question for social science and history is: Why the West?

Economic historians have discovered that until a couple of centuries ago the ordinary folk of Europe and Africa and Asia and the rest were about equally poor, stuck from the caves to 1800 at an average $1 to $7 a day, notionally $3, pretty much regardless of where they lived. Our ancestors on average never approached the astonishing $33 worldwide average of today, and did not come remotely close to the dumbfounding $100 a day or higher that two billion or so of humankind now enjoys, and more and more every year. The change since 1800 is well labeled “The Great Enrichment.”

As Prof. McCloskey graphically depicted in her talk, for 100,000 years our ancestors lived in dirt poverty, then, explosively, it began to change, only a couple of centuries, starting in Europe — really in England.

How did this miracle, which we take for granted, ever happen?

I do not dispute the importance of the ethical and rhetorical changes Prof. McCloskey focuses on to explain the rise of the modern, industrial world — but I disagree about their primacy.

Webs of causation, many factors, numerous necessary but not sufficient conditions … . The multiplicity of factors identified by Alan Macfarlane are critical. The family systems identified by Emmanuel Todd

We discuss these factors in America 3.0.

But she is onto an important and neglected part of the story.

The Great Enrichment came, I say, from a unique unleashing of human creativity in a novel liberty and dignity for ordinary people— in northwestern Europe from the sixteenth century on, the liberating and honoring of market-tested improvement and supply.

The change, the Bourgeois Revaluation, was the coming of a business-respecting civilization, accepting of the Bourgeois Deal: “You let me, a bourgeoise, make market-tested improvements, and in the third act of the drama I will make all of you richer.” Much of the elite, and then also much of the non-elite of northwestern Europe and its offshoots, came to accept or even admire, in a word, the bourgeois values of exchange and improvement. Or at least it did not attempt to block them, and even sometimes honored them on a scale never before seen. Especially it did so in the new United States.

Deirdre McCloskey is a great and compelling advocate for the importance of freedom, without which we would not have ever escaped from the grinding curse of perpetual ignorance, oppression and poverty which our ancestors suffered under.

She has a good piece in the Financial Times, from August 12, 2014, Equality lacks relevance if the poor are growing richer:

Never had anything similar happened, not in the glory of Greece or the grandeur of Rome, not in ancient Egypt or medieval China. What I call The Great Enrichment is the main fact and finding of economic history.

The Great Enrichment came from innovation, not from accumulating capital or exploiting the working classes or lording it over the colonies. Capital had little to do with it, despite the unhappy fact that we call the system “capitalism”. Capital is necessary. But so are water, labour, oxygen and pencils. The path to prosperity involves betterment, not piling brick on brick.

Taxing the rich, or capital, does not help the poor. It can throw a spanner into the mightiest engine for lifting up those below us, arising from a new equality, not of material worth but of liberty and dignity. Gini coefficients are not what matter; the Great Enrichment is.

36 thoughts on “Deirdre McCloskey at the Illinois Policy Institute: The Ethical and Rhetorical Foundations of Modern Freedom and Prosperity”