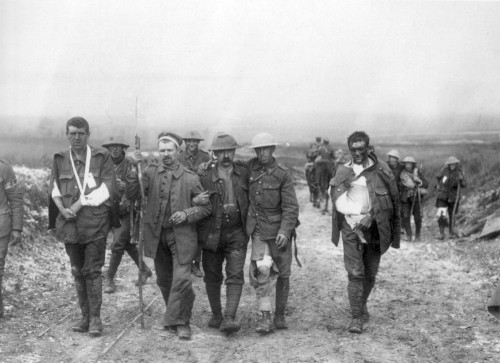 A friend asked for recommendations for books about World War I. I responded with the following list. I have read all of the books on the list. There are many books I have heard of and I am sure are good, but I only put ones I have read myself on the list.

Please list any favorites I have missed in the comments.

[Jonathan adds: Please also let us know if any of the book links don’t work or if we have overlooked a link to a public-domain edition of any of these books.]

— a good addendum, depicting the German Army in the closing months of the war.

Robert Graves, Good-Bye to All That

, Memoirs of an Infantry Officer

— very solid, not quite so literary as Graves

Sidney Rogerson, Twelve Days on the Somme: A Memoir of the Trenches November 1916

also by Rogerson, The Last of the Ebb: The Battle of the Aisne 1918

— both down to earth depictions

Herbert Hoover, the first volume of his memoirs has a section on the outbreak of World War I and his involvement in getting food into occupied Belgium. An unusual, informative and fascinating perspective. The book can be had for pennies (free here, or on Amazon

The novel by Joseph Roth, The Radetzky March

is very good on Austria Hungary up to the outbreak of the war. It is a great favorite of mine.

I recently mentioned this to a friend:

I just read The Phoenix Land: The Memoirs of Count Miklos Banffy

. He was a senior guy in Hungary before, during and after World War I — including being foreign minister after the war. He was starving in Holland trying to make money painting portraits when they asked him to come back into the new government. He was holding no cards at all in the negotiations. It is painful reading. Hungary was, as he said, small, weak, defeated and despised.

Banffy is worth reading. He is a good companion as an author and he has a unique perspective on events.

Similarly, for the era, perhaps my favorite book, period, is The World of Yesterday

by Stefan Zweig, which covers the period before, during and after the war. I wrote about it here. Note that the discussion in the comments to the Zweig post is unusually good, and focuses on World War I.

, Anthony Saunders — puts the Western Front in perspective and shows the dynamic response to horrendous conditions

Battle Tactics of the Western Front: The British Army`s Art of Attack, 1916-18

, Paddy Griffith — helped to destroy the myth of British incompetence in WWI

The Great War on the Western Front: A Short History

, Paddy Griffith — good overview of the military dimension of the campaign

, Shelford Bidwell and Dominick Graham — very good on how the war was actually fought

The Killing Ground: The British Army, the Western Front & Emergence of Modern Warfare 1900-1918

, Tim Travers — good on how the British Army learned how to fight a modern war

, Bruce I. Gudmundsson — this is a good book though it perhaps understates the innovation on the Allied side

Quest for Decisive Victory: From Stalemate to Blitzkrieg in Europe, 1899-1940

, Robert Citino — a superb book that places WWI in context

The German Way of War: From the Thirty Years’ War to the Third Reich

, also by Robert Citino, is good on how the Germans wanted to fight and why they couldn’t do it in WWI

, J. P. Harris — a fair treatment of the controversial commander, it shows in particular the constraints he faced, but does not excuse Third Ypres / Passchendaele

If Germany Attacks: The Battle in Depth in the West by Graeme Chamley Wynne — This book contains a good description of the defense in depth developed by the Germans late in the war

Sepoys in the Trenches: The Indian Corps on the Western Front 1914-15

, Major Gordon Corrigan — very good book about the almost forgotten contribution of the Indian Army in the opening months of the war, including much amazing heroism

Pyrrhic Victory: French Strategy and Operations in the Great War

They Fought for the Sky: The Dramatic Story of the First War in the Air

, Quentin Reynolds — A childhood favorite, which held up well when I re-read it a few years ago

World War One: A Short History

, Norman Stone — idiosyncratic, short, a good read. The bibliography is full of stuff I want to read.

A Peace to End All Peace: The Fall of the Ottoman Empire and the Creation of the Modern Middle East

, still the only general book on the subject, Stone is an engaging writer

to be disappointing. He is always an engaging writer, and the book has much good in it. Unfortunately he was not current on the trends in thinking about the war and repeated old myths about the British performance in the war.

Germany and England (or free here), J.A. Cramb (1913) is excellent for understanding the German mindset before the war, a war they wanted to fight.

Britain and the Origins of the First World War: Second Edition

by Zara S. Steiner — a superb book about the run-up to the war

Over Here: The First World War and American Society

, David M. Kennedy — a good book, Prof. Mearsheimer assigned this one in college

, John Darwin — this is a superb book, and World War I is fitted into a much larger picture

, Avner Offer — This is an eye opening and unusual book, which explains the impact of blockade on Germany and the nearly fatal u-boat offense against Britain

Gordon Corrigan, Mud, Blood and Poppycock: This Will Overturn Everything You Thought You Knew about Britain and The First World War

— the title is hyperbolic, and the tone is polemical, but Corrigan provides a strongly revisionist account which helps clear away some of the myths

Some time ago, I had a post entitled “So, How Would You Teach a Course on World War I?” which may be of interest in this regard.

34 thoughts on “Some World War I Book Recommendations”