While on vacation I stumbled across a bookstore with new and used books.  There are so few bookstores nowadays that I went inside and they had an excellent selection of bestsellers and obscure choices.  I paid for my purchase and, on the way out, noticed a big box full of the Ballantine’s Illustrated History books that originally retailed for $1 (I have some that must have come from England because they were one pound) and had to select a few for lazy Sunday reading. 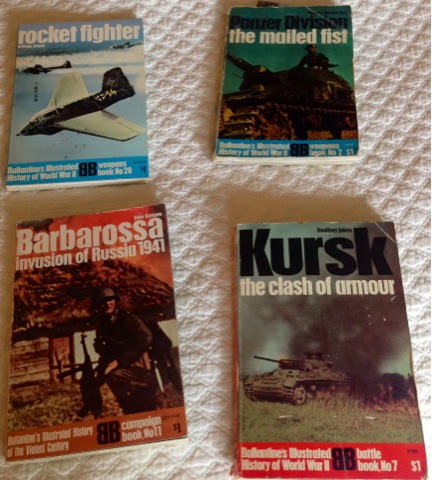 These books come from a series and I have read many of them over the years.  I picked up the Barbarossa 1941 book and it appears to be one of the first titles written by John Keegan, the famous author of “The Face of Battle” and many other works.  For such a small book it is able to distill the essence of that fateful year with great maps, photos, pithy text, and diagrams.


Certainly not all of these books hit that high mark; but many are fantastic.  Since they use every inch of the paperback for superb graphics and well placed text, to some extent they should be considered a work of art.


I looked a bit and Ian Ballantine was a visionary; on Wikipedia they mention that he was one of the first businesspeople to realize the power of the paperback book and how it could open the world to so many more readers.  He produced the first softcover of “The Lord of the Rings” and helped to popularize modern science fiction.


While this would seem like an extreme stretch to someone young today I can see many parallels with this and the early stages of the Internet.  Prior to the paperback, books were very expensive and access to them was limited to facilities (libraries and the rich) where you had to physically go and view them.  Certainly you had libraries (one of my earliest technological memories was being astonished at the bar code reader that was scanned in the 1970’s at our suburban public library) and this partially provided access to books but paperbacks meant that you could OWN books and build your own collections even on modest means.  Beyond that, the TYPE of books that were printed was changed; you weren’t just producing titles for the rich to read and / or keep on a shelf to prove that they were educated; topics like WW2 and science fiction that were of high interest to the non-wealthy also became prominent because they were economic to produce and market for the first time.


These titles, especially the best put-together ones – were like web pages of their day.  They fit all this information into a compact space with an eye for how the reader wanted to view the information most efficiently.  Maps, photos and diagrams were well integrated with the text; a fine graphic designer would recognize all of these principles with a modern web page (except, of course, that these books were static and permanent and did not enable user action).


10 thoughts on “Lazy Sunday – And Paperbacks As Early Web Pages”