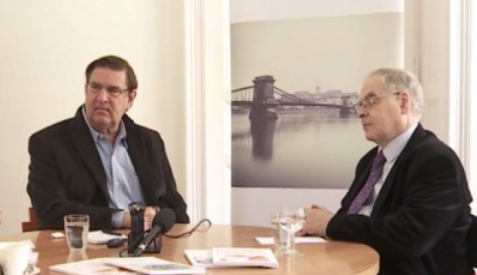 A few months ago Jim Bennett and I had an essay published in the Hungarian Review. The essay is titled America, England, Europe – Why do we Differ? In it we apply the same type of analysis we used in America 3.0

. In the next issue, George Schöpflin responded to our essay. We in turn replied to his critiques, in A Rejoinder to George Schöpflin. I discussed this exchange in an earlier post.

John O’Sullivan is the Director of the Danube Institute in Budapest. John arranged for a debate between Jim Bennett (on the left in the photo) and George Schöpflin (on the right), which took place on March 27, 2014. The Debate is entitled: Continuity as a Model for Central Europe?

there is a significant difference between Western Europe and the rest of the world, for example the difference of endogenous and exogenous marriages, the latter produces outward looking societies. All of Western Europe shares this heritage, including Hungary. But there is a predictor in Europe: who was modernized in the 19th century and who in the 20th century. There is a further, significant separation between England, Eastern Scotland, and the continental areas. There is the question: how important is the family system, versus other important things like religion, culture, and language? My opinion is that the family system is as equally important as other factors. People typically analyse national differences, but the family system lines can be good predictors of different models of state buildings, too. Attempts to build states across the lines of different family systems might result in trouble areas within Europe.

Video of the debate, with a partial transcript is here.

It is also available on the America 3.0 YouTube page.