Spotted yesterday, when we were taking our book stuff back to the public parking structure down the street from the Capitol Building … A 2nd Amendment Dog Walk. They had their dogs and their weapons, and flags, and seemed to be a very jolly and cheerful crew, seeing that that they were in the epicenter of liberal-slanting Austin; that little patch of blue in a sea of red. They were there to support a 2nd Amendment-backing candidate for office. 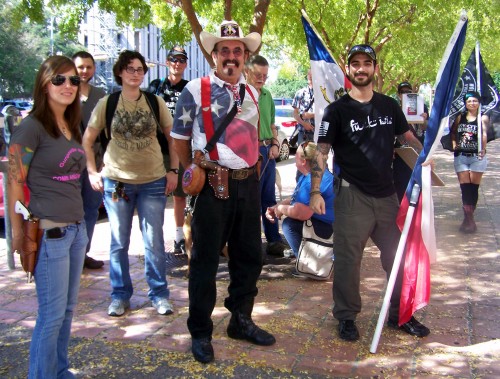 And yes, the t-shirt that the young man at the right does say f*ck ISIS in letters supposed to look like Arabic script, which is very clever of someone.

7 thoughts on “Another Interesting Austin Scene…”