Recently I was at an art exhibition and I saw a book about the “School of Rock” which takes kids with an interest in music and sets them up in a band situation and allows them to work together and perform live. I think it is a great idea and I have a friend whose son plays drums and has really gotten a lot out of this in terms of confidence and poise. 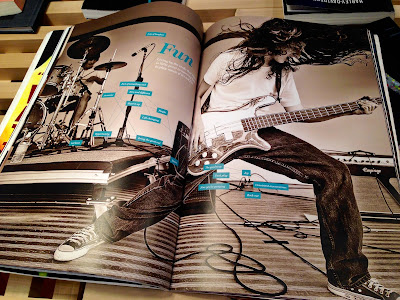 I had my own experiences learning an instrument and playing in a band which really were formative to my business experience, although I never really thought of them as “formally” part of my background until I looked at that photo and remembered these 25 posts.

Back in the 1980s I used to play bass guitar (switched from regular guitar) and was in various local bands with friends which typically went nowhere except maybe some free gigs in a public place or someone’s backyard. I absolutely am not a good musician nor was I particularly talented.

However, the act of participating in a band in that era had many of the hallmarks of being in a small business. First of all – you needed to have some money to buy gear. You needed a bass guitar, a few amps (one to practice on at home, and one to leave at the primary practice space), and if you had extra money – a PA system which we could use for the entire band and microphones for the drums, vocals, etc… Actually having gear and these extra pieces of equipment immediately made you a more attractive potential band member, regardless of your skills.

Back then you had to market yourself – there wasn’t any social media and the internet didn’t exist. Maybe you went to a record store and hung out and put a note on a bulletin board with the bands you liked and what instrument you played, or you’d hang around Guitar Center or its early predecessor and play their guitars for hours until someone kicked you out for not buying anything. You also might see someone at another band’s show, and after a while you knew a bunch of local musicians.

The talent levels varied widely. Some kids didn’t have to work (I worked part time jobs) and thus were able to practice much more than everyone else. Or maybe that was just an excuse for why I stunk. When you are in an artistic endeavor it is not like accounting – a great guitarist is many orders of magnitude better than someone who is average – and it is immediately apparent. So that was a bit humiliating.

You needed to find some place to practice – and playing in a band can be LOUD. If you have a drummer banging away hard and you are in a small confined space (a basement) then everyone just cranks up until they can hear themselves over the drums and pretty soon you have a blasting guitar, bass, drums and singer (minimum) in a very tight space. You practically go deaf and my ears used to ring for days. It was best to play when no one was around because the families often couldn’t take it and told us to shut up. My parents were very patient with me; looking back, it was quite an annoying hobby.

After playing in a band for just a bit you can see how band members hate each other and want to kill one another. Everyone usually starts out with relatively similar musical interests but then soon it diverges and people get girlfriends / jobs / etc… and the level of interest wanes. If you go way out of your way to practice and learn the songs and take time off work and then the other guys show up late or totally messed up that is just frustrating. Plus at that age we were pretty raw and it wouldn’t take much to set everyone off.

The politics can get ruthless. I was kicked out of a band but I didn’t even know it; they just kind of stopped returning my calls and that was that. In high school I have to admit it hurt my feelings a lot. Unlike the “School of Rock”, rejection was pretty damn raw and there weren’t any adults to mediate the situation. You just got booted and came by and grabbed your equipment and that was that.

Playing in a band also meant you met people from all walks of life. If you were on the typical college path, you hung out with kids in honors classes and it was pretty much assumed you’d do something after high school that wasn’t blue collar. You lived at home with your parents and had a part time job and played music when you had a chance. However, many musicians back then had done this for years and had regular full time jobs or a series of part time jobs and maybe lived in a crappy apartment on the edge of town. I’m sure that they wanted to punch snot-nosed kids like me from time to time for taking for granted all the nice things that you get from having non-divorced parents and a reasonable financial situation compared to the actual working life that comes with the real world. On a similar note the dating app t*nder (don’t want the traffic) is also said to link up people from all class levels – since it is just looks you might be connecting with a lawyer or a barista or a student. It is a great leveler.

I’d say being in a band objectively taught me that there were some things I was terrible at relative to other people and that life wasn’t fair. It also showed the importance of organization and logistics, since getting everyone together at a regular time with all the required equipment was a big effort back before cell phones and social media. You gained valuable social skills since you met with people far different than you who were at a different stage of their lives. Finally you learned the difference between something that was a “hobby” vs. something that paid the bills – it was impossible to “make it” as a musician unless you had 20x the talent of me, the looks, and the craziness to do something like this for a living.

But I wouldn’t trade it for anything.