Recently we contemplated buying a new mattress. There are seemingly infinite ways to approach this problem, from the Hasten’s bed store down the street in River North where they cost $16,000 and up to the re-occurring commercials on TV promising custom or cheap mattresses. This article in the NY Times “How to Find the Best Mattress in the Maze of Choices” explained how customers were confused in a world of competing brands, technologies, and choices.

Since we are not excited about spending all day shopping and fond of trying something new, we took up one of their recommendations which was a company called Casper which can be found at http://www.casper.com. Casper was well recommended on their site and sold only ONE product (reminiscent of Apple’s strategy) which was a mattress that they ship to you in a box. The only difference was the size of the mattress to fit your bed frame. We bought a queen size mattress with shipping and tax included for $850.

This model is highly innovative. Instead of investing in a vast distribution system and retail footprint, moving to an online only (they have one store in NYC) model with a much smaller shipping plan (it is much easier to ship this box than a standard mattress), they should be able to beat the hell out of competitors assuming that they have a superior product.

Here is what the box looked like when it arrived. It was a relatively small box and I could put it on a cart and manhandle it around the condo. 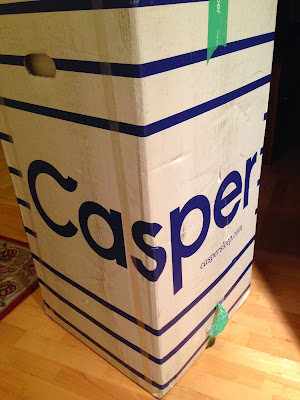 After we opened the box, we found the mattress looking like this, all rolled up and waiting for the big reveal. 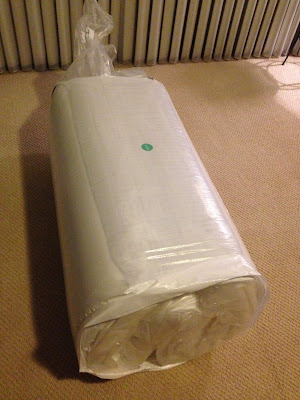 And this is what the mattress looked like after we followed their instructions for opening the bag in which it was tightly wound. I guess I should have made a movie of it. After a few seconds it formed out into the natural state of being a regular mattress. 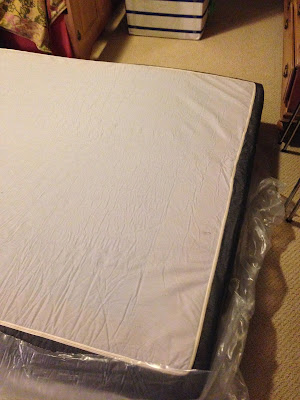 How did the mattress perform? We like it. It has a built in cover top with memory so that you sink into it a bit. We used to have a very hard mattress and when one person (me) flipped around in bed the other person flew around like what occurs when you jump on a trampoline and send a little kid flying the opposite way. We are very happy with the purchase, the price, and the way we received the mattress.

One caveat – when we unrolled the mattress it STUNK with a sort of chemical smell. I have smelled this before with new mattresses or mattress toppers. We left it out on the floor next to our existing bed for a week or so and opened the window as often as we could so that it would air out. After it all aired out, everything was fine.

9 thoughts on “Innovation – A Bed in a Box From Casper”