In the 1960s the Aerojet company was considered* as the possible supplier of solid-fuel rocket motors to be used as primary power plants for the Saturn I space booster. The idea was to use a single, very large rocket motor in place of a cluster of smaller, though still large motors on the Saturn’s first stage.

The first-stage motor (see also the photo of a test-firing on this page) was to be approximately 21 feet in diameter — so big that it could not be transported by road, rail or air. Aerojet therefore built a facility in the Florida Everglades, about forty miles South-Southwest of Miami and remote from residential areas, where the motors could be assembled and tested, and from there barged to the Atlantic Ocean and then up the coast to Cape Canaveral, where they launched the rockets. The State of Florida provided land and built the canal that Aerojet wanted. (A corporate-welfare boondoggle, yes, but probably a modest one in the grand scheme of such things.)

[*Update: Rand Simberg was kind enough to link to this post. One of his commenters says that Werner Von Braun, designer of the Saturn I, never considered using a solid booster, and that Aerojet’s Everglades plant was thus a self-inflicted boondoggle by the company. Another commenter provides a link to a website (search on the word “Thiokol”) that provides information about a plant that Thiokol built in Georgia to develop rocket motors similar to the ones that Aerojet developed. At least one of the Encyclopedia Astronautica articles about Aerojet, to which I linked above, mentions Thiokol as a parallel developer of large solids. However, I don’t know enough to evaluate this information, so I am putting it all out with the suggestion that you read the comments on Rand’s post.]

You can read the Encyclopedia Astronautica articles linked above to get a better idea of the project’s technical history. The short version is that NASA never did use Aerojet’s giant rocket motors, and Aerojet eventually gave up on its plant and sold the land back (nice trick) to the State of Florida, which holds it to this day as a nature preserve. Most of the original buildings associated with the plant, and some of the machinery, appear to be still there, albeit in decrepit condition. It’s accessible, though the last couple of miles of the access road are closed to motor vehicles, so if you want to visit you have to bicycle or walk part of the way. There are a few houses nearby, and people come to bird watch or to fish in the canal that parallels the road, but the place is essentially deserted once you get past the no-motor-vehicles-beyond-this-point sign. 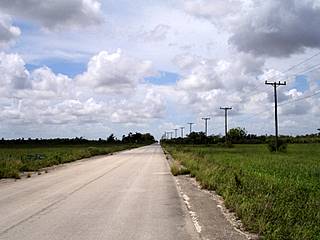 Near the North end of Aerojet Road, looking South. 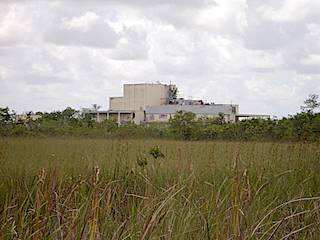 Aerojet ruins. (Does anyone know if the “youth farm” buildings were part of the Aerojet complex?) 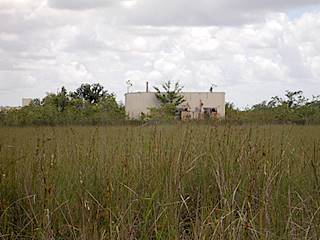 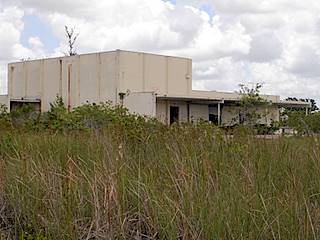 Still more ruins. I have no idea what these buildings were used for. 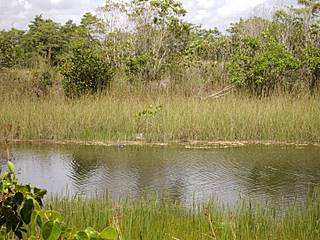 Canal adjacent to Aerojet Road (not the Aerojet Canal) with cute alligator. 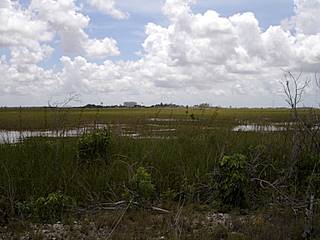 The big shed comes into view near the South end of Aerojet Road. This photo gives a good view of typical Florida savanna. 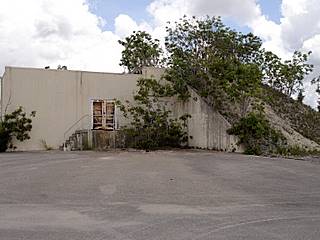 Blockhouse at the end of the East-West road that leads to the shed. From the design and location of this structure I suspect it was used as a control room for rocket tests. Perhaps someone more knowledgeable than I am could comment. 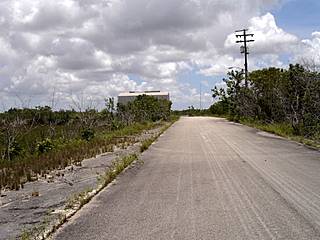 East-West road between blockhouse and shed. 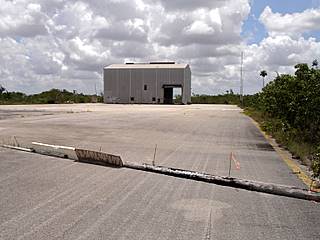 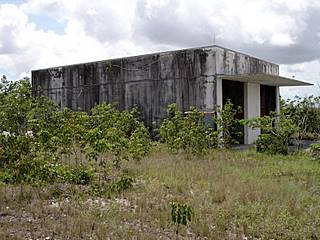 Garage for emergency vehicles, I assume. 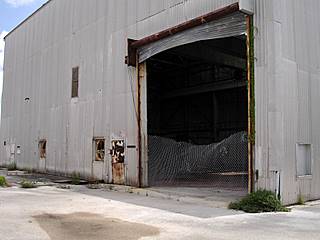 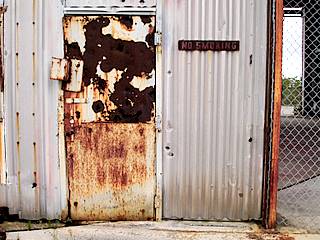 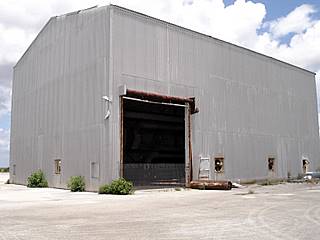 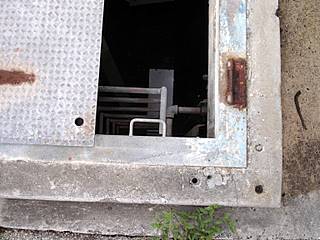 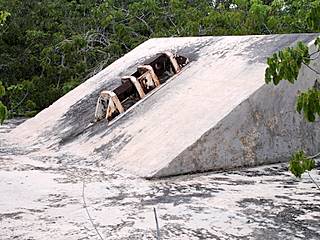 Location “B” (see the second-from-top Google Maps screen capture above). I don’t know what this is but it’s obviously intended to bear a huge load (from test-firing rockets?). 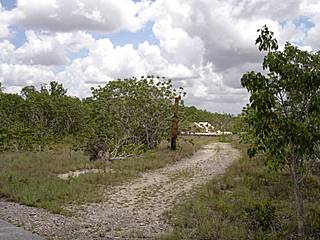 Location “A”. Note the large cable saddle in the middle of the pic. 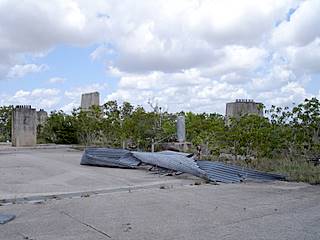 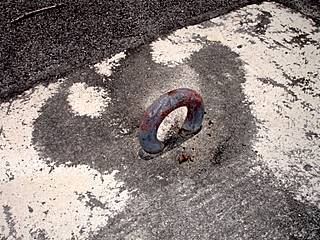 Equipment or vehicle tie-down point near the shed. 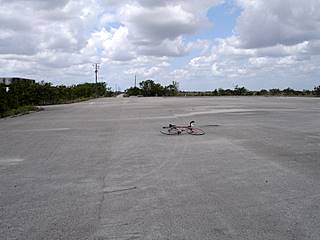 Looking West from shed toward blockhouse. 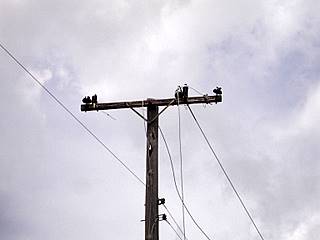 Test firing of giant rocket motor. I can’t tell for sure but the shed in this photo appears to be the same one that’s still on the site, which gives an idea of the size of the rocket. Also, while I don’t know where the testing occurred relative to the structures that remain on the site, it appears that the pictured test may have been done in the area between points “A” and “B”, to the East of the shed. Another possibility is that the firing pit is under the shed, and that the shed was moved out of the way for tests. (Can anyone add to or correct this explanation?) (Photo courtesy Aerojet, via this page.)

I visited the Aerojet ruins early last July, looked around for a few minutes, took some photos and left. The biting flies made it difficult to hang around, which is probably why the place was deserted. If you visit, try to go during the fall or winter, when there are fewer bugs, and bring repellent. It might also be a good idea to bring a friend, since this place is a bit away from the beaten track.

If you are interested in seeing the Aerojet facility it might be a good idea to go soon, as the Florida climate is not conducive to long-term preservation. Also this area looks like prime residential real estate for any giant segmented-bodied space aliens that decide to take over our planet.

While you’re in the neighborhood you can also visit (see the top Google image above):

-and the legendary Everglades Alligator Farm.

Sensory overload! And you thought this part of the country was flat, featureless and tacky.

Finally, the highest hill in South Florida towers like an Alp over the tomato fields and housing developments, just West of scenic Florida City: 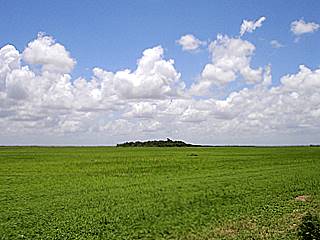 One takes what one can get.

UPDATE (8/28/2007): In the comments, Krypton1976 is looking for the locations of several specific NIKE missile sites in the area.