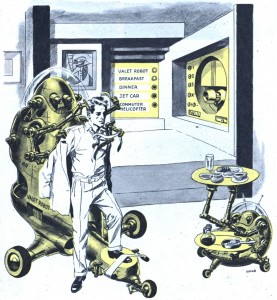 Or so they thought in 1957 in this Mechanix Illustrated exposé.

The description of the robot valet and cook makes it seem like dependence would make us more of a slave to the technology then the other way around, but the robot cars and drones are closer to the mark. I can’t imagine anyone waving amicably at today’s red light cameras, although many drivers would probably welcome the hail of bullets fired in their direction.

The robot reporters prediction was about 50 years too soon, but we’re now starting to see them for statistics heavy topics like fantasy sports.

The most amusing part is about GE’s role in the upcoming cyber serfdom.

Most remarkable is General Electric‘s new Yes-Man, a master-slave manipulator of incredible dexterity. Any movement the human master makes with his hand, even lifting a finger, is faithfully duplicated by the powerful slave machine. In a fantastic demonstration, Yes-Man fixed a girl model’s hair-do and applied cosmetics, all with the gentle touch of a woman’s hand.

Of course, it took awhile, but we know now that the GE Yes-Men did in fact come into existence and took over the entire company. For the past decade they apparently had the same short term forecasting skills as Mechanix Illustrated.

According to the article, this was all just a walk in the park for cybernetics pioneer Dr. Norbert Wiener who envisioned the Age of Robots unfolding before us. Well, he didn’t exactly deliver the Jetsons, but Wiener did leave us with some insights to give us some pause in our pursuit of a future with digital autonomy.

Finally the machines will do what we ask them to do and not what we ought to ask them to do. In the discussion of the relation between man and powerful agencies controlled by man, the gnomic wisdom of the folk tales has a value far beyond the books of our sociologists.

In short, it is only a humanity which is capable of awe, which will also be capable of controlling the new potentials which we are opening for ourselves. We can be humble and live a good life with the aid of the machines, or we can be arrogant and die.

7 thoughts on “In the Future We Will All be Slaveowners”