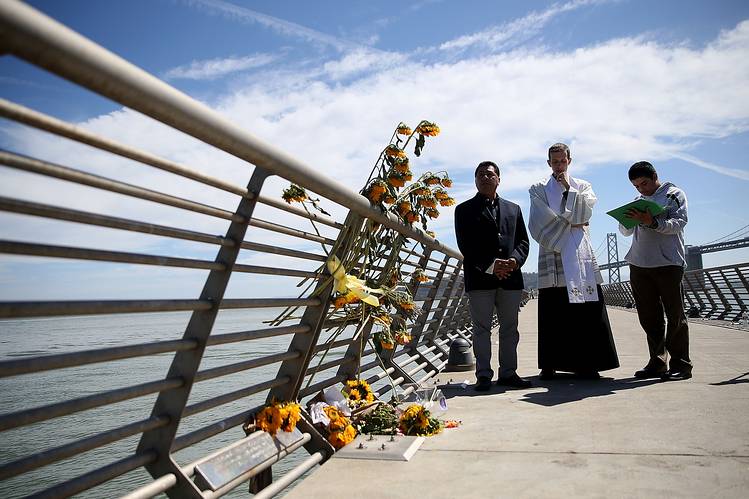 There are a number of national stories recently that seem to resonate with voters. A big one is the killing of a San Francisco woman by an illegal alien with seven felony arrests who was deported five times.

The fatal shooting of a woman in San Francisco last week, allegedly by an illegal immigrant man convicted of seven felonies and previously deported to Mexico, has sparked a debate about the extent to which local law enforcement and federal immigration authorities should cooperate.

At issue is the Department of Homeland Security’s practice of seeking to identify potentially deportable individuals in jails or prisons nationwide by issuing a “detainer,” a request rather than an order to extend the individual’s detention.

San Francisco is a “Sanctuary City” which has pledged to resist efforts by the Immigration and Customs Enforcement agency to deport illegal aliens.

On March 26, Mr. Sanchez was booked into the San Francisco County Jail on a local drug-related warrant after serving a federal prison term, the city’s sheriff’s office said. The next day, Mr. Sanchez appeared in San Francisco Superior Court and the drug charges were dismissed.

After San Francisco officials confirmed that Mr. Sanchez’s federal prison term had been completed and that he had no active warrants, he was released from jail on April 15. He was freed despite a request from Immigration and Customs Enforcement, a division of DHS, to the city’s sheriff’s department that would have enabled the federal agency to take him into custody.

This is routine, plus of course, the fact that the Obama Administration has chosen to facilitate illegal immigration and resist deportation.

The outrage was largely dismissed by the political left and the Hispanic activist community.

Later in the segment, Kelly said of President Obama, “He picks and chooses the victims he wants to highlight and apparently this victim wasn’t deemed worthy.”

Those words come from an anchor who said, “I’m a straight-news anchor. I’m not one of the opinion hosts at Fox.”

Fair enough but Obama has ignored the matter while sending multiple administration officials to funerals and other demonstrations concerning incidents involving black victims. What is puzzling is the absence of concerns about illegal immigration on the part of Republican presidential candidates. Jeb Bush has called statements by Donald Trump about illegal immigration “offensive.”

Republican presidential candidate Jeb Bush says he is personally offended by rival Donald Trump’s recent remarks about Mexico and immigrants and calls the remarks far outside the mainstream of Republican thought.

“I don’t think he represents the Republican Party, and his views are way out of the mainstream of what Republicans think,” Bush told reporters after marching in Fourth of July parades in Amherst and Merrimack, New Hampshire.

I can’t find any comment by Bush specifically on the incident in San Francisco. He has said no more than President Obama. Donald Trump, on the other hand, has said plenty.

Donald Trump, who declared during his presidential campaign announcement that Mexican immigrants were rapists and killers, took to Twitter on Friday to use San Francisco’s fatal shooting at Pier 14 to once again slam illegal immigration and call for stronger border control.

Trump tweeted out his “heartfelt condolences” to Kate Steinle and her family. Steinle, 32, was shot and killed Wednesday by 45-year-old Francisco Sanchez while she was walking with her father and a family friend along the pier.

Trump actually did not say all illegals were “rapists and killers” but the Contra Costa Times represents the mentality of the Sanctuary City supporters. The other Republican candidates are largely silent on the matter.

Arizona’s major Chamber of Commerce group, both U.S. senators and a host of other GOP backers heaped their ire on Trump as the visit to Phoenix drew near. Republican Gov. Doug Ducey, who met presidential hopefuls Sen. Marco Rubio of Florida and Wisconsin Gov. Scott Walker when they were in the state, is snubbing Trump. Protesters like the ones who greeted Trump in Los Angeles were expected.

The Chamber of Commerce support of the Republican party is not on the side of the immigration skeptics but the voters are.

GOP candidates are actually running away from the issue.

Candidate after candidate used appearances on Sunday talk shows to denounce Mr. Trump and distance themselves from him after the billionaire real estate mogul criticized Mexicans and immigrants who come to the US illegally as “rapists” and “killers.”

I don’t trust Trump as a Republican and worry that the party is opening a gulf between the concerns of voters and those of donors who are largely unconcerned about illegal immigration. That is not the only issue where the party is drifting away from the base voters. The Confederate flag hysteria is making some Republicans look like fools. Corporations are overreacting.

Elaine Glidewell told KFSM someone from the store in Fort Smith called her to pick up the ring she’d ordered for her nephew, but when she arrived on Tuesday, a clerk told her she couldn’t have it. The ring had been ordered before Walmart stopped selling items bearing images of the flag, in the wake of controversy that stemmed from a racially-charged shooting in South Carolina.

“I wanted to cry,” Glidewell told KFSM, adding that the store clerk said the ring would be “melted.”

This is just ridiculous. That is not to say Republicans should be doing stupid things like proposing amendments to keep Confederate flags in national parks. They should just shut up and vote with the people.

Trump is drawing huge crowds of Republican voters and the other candidates are drifting away from the base.

The planned speech is already attracting a storm of attention. Even as city leaders have asked Mr. Trump “to stage his hate-filled circus” elsewhere, ticket requests have been so high the campaign has moved the speech from the swank Arizona Biltmore hotel to the convention center downtown.

The city leaders of Phoenix include Democrat Mayor Stanton, who of course, is taking the Democrat position.

“Mr. Trump certainly has a First Amendment right to bluster as much as he wants, and even to pander to our worst instincts in a sad attempt to win votes at the expense of hard-working, honorable, law-abiding Latinos,” Daniel Valenzuela, a Democratic councilman and the city’s vice mayor, said on Thursday. “However, we should draw the line at allowing him to use the Phoenix Convention Center — a public building funded by all of our taxpayers’ dollars.”

I am not surprised that Democrats, who rule most large cities and who support the same Sanctuary City policy, would oppose Trump. A few Republicans, like Tom Cotton are doing something. Cotton has proposed ending federal funds for sanctuary cities.

Cotton says he is unsure if his amendment will get a vote this time around, but “I have received very good feedback that they want to address this problem. I will continue to push for Senate floor time.”

Some Republicans, on the other hand—even those who are deeply troubled by the existence of sanctuary cities—believe that cutting off federal funding may be too harsh a punishment.

“That is a pretty blunt instrument. There are other ways to deal with it,” said Senate Majority Whip John Cornyn of Texas.

Eradicating sanctuary cities pits two core Republican priorities against one another: enforcing immigration policies versus making sure that the federal government doesn’t get overly involved in local and state affairs.

That’s a fair question but why are federal funds going to cities now ?

The usual corporate backers of immigration are making the usual arguments.

With few exceptions, Republican presidential candidates have lined up in strong opposition to legal status for undocumented immigrants. Not by executive action, not by legislation. “No amnesty,” said Wisconsin Governor Scott Walker. Donald Trump’s incendiary comments on Mexican immigrants as he entered the race has placed a renewed focus on the issue in the crowded primary contest.

But there’s one question that neither The Donald nor his fellow Republican candidates have been willing to answer: What should the U.S. do with the estimated 11 million people already in the country illegally?

I could answer that question, which is of the “Have you stopped beating your wife ?” variety. Once the border is closed, we can deal with the long term illegals who have clean records. The more serious question is why have Republicans, except Ted Cruz, left the field to Donald Trump who is a self promoter and very unreliable as a Republican loyalist.

Trump looks to me like Ross Perot in 1992. He has a history as a Democrat and a friend of Bill and Hillary. Perot had one issue in 1992.

77 thoughts on “Is the corporate wing of the GOP leading the party to disaster ?”