I recently had a guest post entitled The Courage of a Reformer at the blog of the Illinois Opportunity Project. My post was in responses to an earlier post by Matt Besler of IOP about Illinois State Rep. Jeanne Ives. 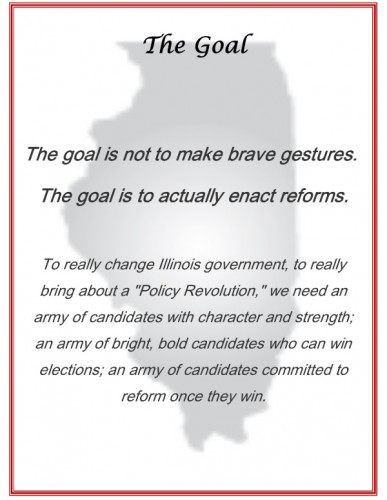 In our book, America 3.0: Rebooting American Prosperity in the 21st Century–Why America’s Greatest Days Are Yet to Come

, we discuss the decline and dissolution of the economic and political institutions of industrial-era America, which we call America 2.0. We describe a different and better America 3.0 which we expect and hope will replace it. But as we make clear, this process will not be pleasant. The transition from agricultural to industrial America was hard. The change to a world dominated by emerging technology, post-industrial, networked America 3.0, will be every bit as hard, and will happen much faster.

Illinois is a specific case, and an especially difficult one, of the transition from America 2.0 to America 3.0. The Establishment here, consisting of politicians from both parties, is referred to without affection as The Combine. Despite the state’s many inherent strengths

, The Combine has “governed” Illinois the verge of ruin. Illinois is the worst-run state in the nation.

is a long book, and we could not put everything into it.

One topic which we hope to write about more in the future is the steps that will have to be taken to make the transition. We got into some of this in the later chapters of the book, but there is a lot more that needs to researched and developed.

One area which we barely touched on, but which is critically finasteridehair important, is the personal character which will be called for from a generation which will in effect be a new “founding generation.” The old order will have many defenders, many of them with good motivations, many with not-so-good motives. There will be unrelenting efforts to prop up the world everyone is used to, and to crush any person, group or business trying to make serious innovations and necessary reforms.

To really matter, to really do something, to really change the direction of our state, means that there will be hardship, rejection, unpopularity, vilification, rejection of material benefits, making people mad by refusing to do what “everybody does,” attacks by the people who benefit from the status quo, not many pats on the back, and incomprehension even from good people.

The committed reformer has to be willing to go up against all that.

What is the reformer’s motivation, then?

If it is not money, prestige, popularity, an easy life, what is it?

A hopeful vision of how things could be, should be, must be, will be better if we change course in Illinois, that is also part of it.

Substitute “America” for “Illinois” and it still works.

This challenge is going to require a lot of effort, from a lot of people. We need to be realists about that. But we must not be cynical. With a hopeful and realistic picture of the future to inspire us, there will be enough people, enough talent, enough drive, enough fortitude, to build America 3.0.

We plan to say much more about this.

3 thoughts on ““The Courage of a Reformer””