We spent the day yesterday ( the 16th) at Waterloo. The battle field is largely preserved and reminds me a bit of Gettysburg. There is an excellent museum and we spent an hour or so at Hougoumont Farm where the battle really began.

Napoleon planned to draw Wellington’s reserve to Wellington’s right flank in defence of Hougoumont and then attack through the centre left of the British and allies’ front near La Haye Sainte.

Before the battle started, Hougoumont and its gardens, located on the allies’ right flank, were garrisoned and fortified by the 1st Battalion, 2nd Nassau Regiment, with additional detachments of jägers and landwehr from von Kielmansegge’s 1st (Hanoverian) Brigade. The light company of the 2nd Battalion, Coldstream Guards under the command of Lt-Colonel Henry Wyndham, was also stationed in the farm and chateaux, and the light company of the 2nd Battalion, Third Guards, under Lt-Colonel Charles Dashwood in the garden and grounds

The fighting here lasted all day and ended finally when the defenders were forced out as the buildings burned. It was too late for the French which had been reenforcing failure all day.

The French eventually committed 14,000 troops to Hougoumont Farm, of whom 8,000 were killed. The most famous encounter was The Battle of the Closing of the gate. The French had surrounded the farm which was an enclosed bastion of brick and stone walls with a gate access to the rear. They managed to force open the gate with axes into the yard but a few British soldiers managed to close it again and all the French who had gained the yard were killed. The few who closed the gate, were to be famous after the battle.

Sous-Lieutenant Legro, of the French 1st Light Infantry, broke through the wooden doors with an axe, allowing French soldiers to flood the courtyard. Graham’s commanding officer, Lieutenant-Colonel James Macdonnell, led his men through the melee in the courtyard to the gates, in an attempt to shut them against the pressing French. This was done with the help of three officers (Captain Wyndham, Ensign Hervey, and Ensign Gooch), Corporal Graham, and a few other soldiers including Graham’s brother Joseph. James Graham was the one to slot the bar in place. Flagstones, carts, and debris were then piled against the gates to hold them secure. The Frenchmen trapped within the courtyard were all killed, apart from a young drummer-boy. 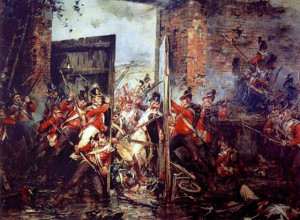 The crucial mistake made here was by Napoleon’s brother, Prince Jerome, who commanded the first French troops to attack Hougoumont Farm. When they were repulsed, Jerome kept reenforcing the attack and drew the French focus to the strong point which resisted all day. 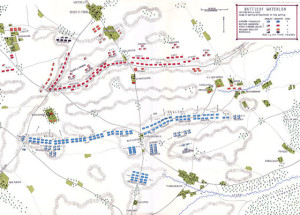 The farm is to the left and in advance of the British lines. La Haye Sainte is in the middle and both were to be crucial strong points for the British. A word about British tactics here.

Wellington was outnumbered and the hard center of his force was his British Peninsula Campaign veterans. He stationed them on the “military crest” of the low hill behind Hougomont and La Haye Sainte. This sheltered them from French cannon fire. Direct fire cannon fired cannon balls which would skip and were devastating for infantry in squares. It was important to disperse these squares when under fire by cannon. Napoleon was a master of artillery and had won many battles with it. Wellington, in Spain, had learned to shelter his infantry. He even had them lie down in the grass behind the crest of the hill to rest and make them invisible to French cannons.

The fact that it had rained hard the night before the battle, a reason often given for the late hour of the French attack, made the ground soft and the cannonballs often dug in rather than skip along the surface.

Infantry squares were almost impervious to cavalry assault so the wise commander attacking such a force would combine artillery and cavalry to weaken and disperse the defenders. Napoleon knew this but his brother drew the center of gravity to the strong point.

The two battalions that defended Hougoumont suffered 500 dead and wounded out of strengths of 2,000.

The French lost 8,000 of 14,000 men. The courage of the men who closed the gate is still celebrated in England.

In August 1815, John Norcross, the Rector of Framlingham, sought to make over the income from a freehold farm to the “most deserving soldier at Waterloo”; he approached the Duke of Wellington, who nominated Graham. Graham received an annuity from the farm of £10 a year for two years until the vicar became bankrupt. Wellington’s Supplementary Dispatches (Vol. 11) make mention of Graham:

[He] assisted Lieutenant-colonel Macdonnell in closing the gates, which had been left open for the purpose of communication, and which the enemy were in the act of forcing. His brother, a corporal in the regiment, was lying wounded in a barn, which was on fire, and Graham removed him so as to be secure from the fire, and then returned to his duty. He had been 3 2/12 years in the regiment.

The same occurred at La Haye Sainte, another fortress in the center. It was well in advance of the infantry lines at the hill crest. The French attacked and the result was the destruction of The King’s German Legion, which had not prepared the farm as well for defense. However, they did hold it until afternoon.

It was the scene of a famous charge by Marshall Ney who led the French cavalry on a futile charge that destroyed the center of Napoleon’s army.

the French could not see the squares until they were almost on top of them.
Here then they came over the ridge at a steady canter, to be decimated by grapeshot from Mercer’s and other batteries, and by musketry from the squares, at an opening range of about 50 paces.

Pressed on by the ranks behind, they charged past between the squares, losing their formation as they did so. Lord Uxbridge came up with the survivors of the Household Brigade, and the infantry watched a bloodthirsty cavalry battle which raged all round them. At least ten times the French cavalry retreated down the hill, or round by the Nivelles road, reformed their ranks and attacked again, until all this ground between the lane and the ridge was so covered with dead men and horses that they could not ride over it.

Uxbridge lost his leg in this battle and it is buried, in the town. 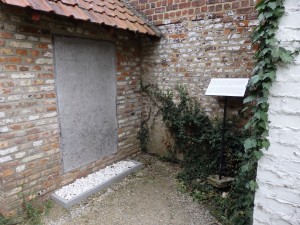 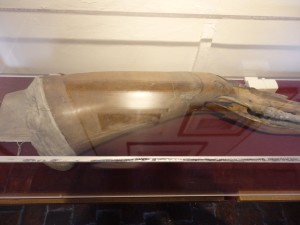 The La Haye Sainte farm is still there although it is not open to visitors. 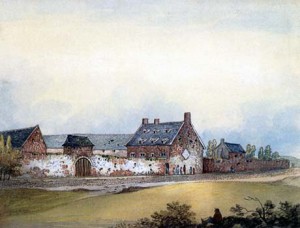 The farm lies in the center and is at present privately owned. I understand there is a pending sale to add it to the museum.

5 thoughts on “Waterloo; the Battle.”