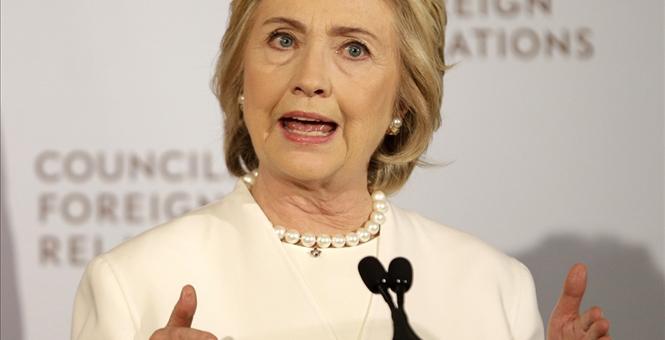 It can only hope to make us so afraid that we do something stupid that either helps it or hurts us. ISIS can only succeed if, blinded by rage and terror, we achieve its goals for it. There are at least two ways that might happen — and one of them is already happening.

I think they expect an attack and are preparing their excuses.

The Meet the Press program on November 22 seemed to set a new theme for the Democrats. First, Hillary this week declared, “Let’s be clear: Islam is not our adversary. Muslims are peaceful and tolerant people and have nothing whatsoever to do with terrorism.”

He seems to be a professional Muslim. A few months ago, they had former basketball player Lew Alcindor, now named “Kareem Abdul Jabbar,” to make the same point about peaceful Muslims.

Abdul-Jabbar told host Chuck Todd that terrorists “do not represent the teachings of Islam” and that this misconception makes it “impossible for real Muslims to be understood.”

He continued by saying that he believes the majority of terrorists are a product of their environment, not their religion:

What is their environment ? What does the Koran say ? Another essay on Islam says something quite different.

The avoidance of analysis of Islam contrasts sharply with the excoriation accorded Christianity, Israel, and Western Civilization. The Catholic Church sex abuse crisis has received saturation coverage. Distinguished history professor Philip Jenkins, in a book published by Oxford University Press, claims that media coverage distorts the crisis and contributes to anti-Catholic bigotry. Israel’s very right to exist is questioned and, in high profile media, at times denied. Western Civilization is depicted as imperialist, racist, and Orientalist. This politically-correct selective outrage that lambastes the Judeo-Christian tradition and Western Civilization while emphasizing positive images of Muslims only serves further to inoculate Islam from critique.

I agree. The alleged “Glory period of Islam” is mostly a myth. The “Translation Period” of Harun al Rashid was mostly done by Greeks who had “converted to Islam” in order to keep their heads.

It was under Harun ar-Rashid that Baghdad flourished into the most splendid city of its period. Tribute was paid by many rulers to the caliph, and these funds were used on architecture, the arts and a luxurious life at court.

In 796, Harun decided to move his court and the government to Ar Raqqah at the middle Euphrates. Here he spent 12 years, most of his reign. Only once did he return to Baghdad for a short visit. Several reasons might have influenced the decision to move to ar-Raqqa. It was close to the Byzantine border. The communication lines via the Euphrates to Baghdad and via the Balikh river to the north and via Palmyra to Damascus were excellent. The agriculture was flourishing to support the new Imperial center. And from Raqqa any rebellion in Syria and the middle Euphrates area could be controlled. Abu al-Faraj al-Isfahani pictures in his anthology of poems the splendid life in his court. In ar-Raqqah the Barmekids managed the fate of the empire, and there both heirs, al-Amin and al-Ma’mun grew up.

Ar Raqqah is of course the present capital of ISIS. I wonder why ?

Objective realities do mark Islam as different from other religions. Among the five major world faiths, Judaism, Hinduism, Buddhism, Christianity, and Islam, Islam is unique in its doctrine of jihad, stated clearly in this hadith, attributed to Mohammed: “I have been ordered to fight against the people until they testify that none has the right to be worshipped but Allah and that Muhammad is Allah’s Apostle, and offer the prayers perfectly and give the obligatory charity, so if they perform that, then they save their lives and property from me.” This hadith is echoed by over a hundred jihad verses in the Koran, a book that is a fraction of the size of the Bible.

Jihad is established not only in Islamic texts. It is exemplified by action. Mohammed ordered at least forty-three assassinations and participated in at least one hundred militarized expeditions. Mohammed is the “perfect example worthy of emulation.”

Islam spread by war, warfare that began in Mohammed’s lifetime, and that has continued in the Muslim world, without significant relief, for 1,400 years. Mohammed died in 632. Muslims reached the Indian Subcontinent by 664 and Spain by 711. Islam’s expansion was stopped only at the Battle of Vienna, September 12, 1683.

Democrats seem determined to make “Islamophobia” a major focus of their campaign. I wonder how that will work ?

Richard Fernandez thinks the “Vietnam Syndrome” is at the center of their concerns.

“Don’t do stupid shit” was a synonym for “I’m not going to get trapped in a Vietnam”. However Rothkopf observed that the most important Red Line in Obama’s world could be crossed the other way around. You could get into Vietnam by backing into it. The administration’s greatest weakness was failing to realize that inaction was also policy. Not doing something could also be “stupid shit” and passivity was no protection from landing ass backwards in a quagmire.

Matthew Yglesias writing in Vox, describes the administration strategy to avoid awakening the spirits which destroyed Lyndon B. Johnson. It essentially involved telling everyone to shut up and cool their jets. After all there ain’t no ghosts and until recently there weren’t no ISIS neither, unless you counted a JV team tricked out in a Lakers uniform. No point making any Republican noises which might attract them.

It really isn’t Republicans that are afraid of ISIS.

the core group of real “Obama people” has a surprisingly dovish self-conception, where they see themselves operating in a world in which demands for military intervention are constant and endless— from the media, from congressional Republicans, from foreign governments and their allies in Washington, and from the permanent security bureaucracy itself — but America’s actual ability to engage in non-counterproductive interventions is quite limited. …
Foreign conflicts are likely counterproductive on many levels — creating new generations of widows and orphans who resent the West, deepening ideological polarization between Islamists and liberals, and opening up new venues for jihad.

Doing anything is a bad idea. The first Obama ambassador to Iraq, Christopher Hill, said to Meet the Press that”We have no interests in Iraq.” That was the Obama foreign policy. He left in 2010. Matt Yglesias puts the matter succinctly;

If there were any ideas for countering it that the White House thought made sense, the administration would be executing them already. But an actual attack on US soil would, on an emotional level, demand that we “do something” — something that would already have been rejected as unworkable or counterproductive. A land invasion of ISIS territory in Syria and Iraq would be costly and only serve to further roil the waters of the region. Yet the idea of a president going on television in the wake of an attack and not vowing further punitive measures is inconceivable.
In this way, the hardest problem in US counterterrorism policy is in some ways as much a speechwriting challenge as anything else. The next time something goes wrong and an attack hits the United States, how do you sell the American people on the idea of not really doing anything about it?

Doing nothing is so much cheaper; until it isn’t.

53 thoughts on “Democrats choose to run as allies of Islam.”