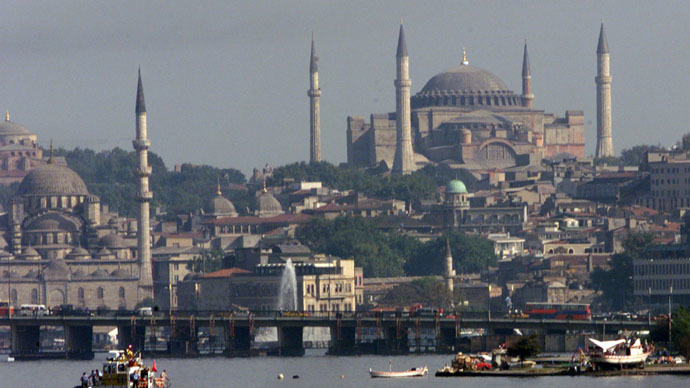 Turkish F 16s shot down a Russian SU 24, a bomber, after it entered Turkish airspace and did not respond to warnings.

A U.S. track of the Russian plane shot down by Turkey shows that the plane was inside Turkish airspace for 17 seconds, CBS News national security correspondent David Martin reports.

After 10 warnings without a response, a Turkish fighter jet shot the plane down Tuesday. U.S. officials said Wednesday that all of the warnings occurred before the plane entered Turkish airspace, Martin reports.

What remains unclear is whether the Russian plane was still in Turkish airspace when the F-16 fired, Martin reports. The explosion that brought the warplane down occurred when it was back in Syrian airspace, the U.S. officials said.

Why did Turkey do this ? One reason may be that the Russians were attacking Turkmen who are opposed to Assad.

Another is that Turkey is involved in oil trade with ISIS.

Foreign Minister Sergey Lavrov, who canceled his planned trip to Turkey after the incident, described the shooting down of the Russian plane as a “planned provocation.”

He said the Turkish action came after Russian planes successfully targeted oil infrastructure used by the Islamic State of Iraq and Syria, or ISIS, alleging that Turkey benefited from the oil trade.

Lavrov also said that Turkish territory was used by “terrorists” to prepare attacks in other countries, but offered no details. He said that Russia “has no intention to go to war with Turkey,” but added that Moscow will re-consider its ties with Ankara.

Turkey has been trending to Islamism since Erdogan took over the government ten years ago.

President Erdogan also attended the summit, proceeding to speak at the event’s closing ceremony: “Muslim sailors reached the American continent 314 years before Columbus, in 1178. In his memoirs, Christopher Columbus mentions the existence of a mosque atop a hill on the coast of Cuba”. In this way, the Turkish President managed to cause a sensation, while ignoring the fact that mere notion of the ‘discovery of America’ is nothing but a linguistic ploy used to consecrate the European domination of the world from the 16th century onwards and to discount the achievements of the continent’s native populations.

Richard Fernandez has a theory about why this is happening.

Charles Krauthaummer argues that since the Turks could not have been spurred into action by such minor Russian intrusion into their airspace, their true motive must have been to signal Moscow to lay off one its proxies, the Turkmen. They were willing to violate the ‘no clash between principals’ rule to emphasize the point.

This I think sort of highlights that, the Turks are the most opposed to Assad of anybody on the ground. It wasn’t only that the Russian airplane went into Turkish air space. It’s that the bombing run was against Turkmen, who a minority in Syria, ethnically Turkish that the Turks have always felt they have to defend.

Remember that Turkey and ISIS are both Sunni Muslim and the entire ISIS movement began as a Sunni reaction to the extreme provocation of the Sunnis by the Pro-Iran government of Iraq.

The challenge has been Russia’s focus on propping up Assad rather than focusing on ISIL. … Until that happens, it’s very difficult. It’s difficult because if their priority is attacking the moderate opposition that might be future members of an inclusive Syrian government, Russia is not going to get the support of us or a range of other members of the coalition.

Putin’s reaction to the incident on the occasion of his meeting with the King of Jordan describes the same strategic picture, albeit viewed from the other side of the lines.

Obama is basically an ally of Iran and that may be why he withdrew US forces that might have imposed discipline on the Iraqi government. In that sense, ISIS was created by Obama as the Sunnis had nowhere else to go. Turkey has little incentive to fight ISIS as they share Sunni religious affiliation and have no love for the Kurds and other anti-Assad forces. They certainly have little love for Shia Islam, of which Alawite is a form.

The differences between Russia and the West are also a a major factor in our dilemma.

Anybody who has met actual Russians knows how little they, even the cultured ones, have been touched by post-modern Western mores on race, gender, and sexuality. They remain comfortable with the tough, ugly, dog-eat-dog world we have. I have tried on multiple occasions to explain “trigger warnings” to educated Russians, but they never believe me and burst out laughing. What causes this — Communism? Byzantinism? Tsarism? something in Russian water and/or DNA? — is debatable but that Russians simply live in a different mental universe than twenty-first century Westerners do is not.

No matter what we wish to see they are not like us. We are getting further and further from any common culture.

Putin and Putinism represent a direct challenge to the post-modern way of life that has become normative, especially among educated Westerners since the 1960’s. A worldview that prefers soft, feminine values to tougher masculine ones, that finds patriotism risible, that believes there is nothing worth dying for, has little to say when the monsters we firmly believed were safely behind the fortress walls, lurking hungrily, turn out to be on our doorstep, and the front door is unlocked.

What can we expect to see in the future ?

Putin is clearly holding Washington accountable for keeping Turkey to the proxy war rules. The most singular thing about the president’s press conference was how completely he avoided addressing the issue of whether Erdogan was a loose cannon. Instead he flew off into the most bizarre tangent possible at such a moment.

next week, I will be joining President Hollande and world leaders in Paris for the global climate conference. What a powerful rebuke to the terrorists it will be when the world stands as one and shows that we will not be deterred from building a better future for our children.
But there was no indication he was taking the Turkish wolf or the Russian bear in hand. Both were left to roam in the wild for the present. Interestingly, it was the French president, not Obama, who was most alive to the danger.

The French have had a rude lesson in nationalism and self interest. We have no leadership that seems willing to accept this as a warning.

The WEIRD take on Putin has been perfectly captured by a piece in The New York Times Magazine, authored by just the self-absorbed, nebbishy sort who both writes and reads the Grey Lady. The author, a Russian Jew who came to America as a child, covers his subject with roughly the same dispassion as a Palestinian would write about Israelis. To learn what makes Putin’s Russia tick, the author submitted himself to a week of non-stop Russian TV, while holed up in a swanky Manhattan hotel, fed with room service finery to counteract all the Kremlin agitprop.

Lots Seinfeld-y inside jokes about calling therapists ensue, amidst constant jibes about how latently homosexual Putin and his testosterone-driven Russia really are. What comes through clearly, however, is that popular culture under Putin has created a mindset that is nationalist and firmly anti-Western in virtually every way; at times, it drips with hatred towards the West, seeing nefarious plots against Russia everywhere. That Russians are a bunch of uncouth idiots is made obvious. But the crux of the matter, as revealed in the piece’s title, “Out of My Mouth Comes Unimpeachable Manly Truth,” is that Russia has simply opted out of the post-modern Western way of life, emphasizing outmoded values such as masculinity, faith, plus traditional sex and gender roles, in a thoroughly atavistic manner.

The US seems to be the one with a weak sense of self preservation. At least the left-leaning coastal elites have little sign of “manly virtues.”

34 thoughts on “What is going on with Turkey (Not Thanksgiving)?”