I have been considering “disruption”, including what is hype and what is real.  Here is one on the cab industry where it occurred and in the electric and gas utility industry which has proven resilient in its current business model.

While “retail” is a nebulous category, it is one that touches virtually everyone in the USA. Let’s start with the definition of retail:

the sale of goods to the public in relatively small quantities for use or consumption rather than for resale.

My experience with retail has been that of a consumer, although I live in an area near Michigan Avenue which features a huge variety of stores of all types, from mass market to high end “showcase” stores. I also have a long history with e-commerce, having been involved in a variety of businesses helping them to go “online” and “digital” from the earliest days of the web. Since the primary threat to modern retail today is from e-commerce, this experience is relevant. 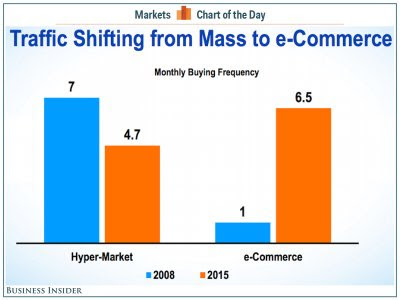 This chart above is from a recent Business Insider article on retail. The graph clearly shows how shopping is moving from the physical retailer to the online retailer, and it is being accelerated by the adoption of mobile technologies (which enable you to shop and research while on the move, not just when you are in front of your computer at a desk).

For years I resisted online shopping for my retail purchases, figuring that I am in the midst of so many stores that I would be able to achieve better bargains and results (less returns) if I physically inspected the goods. But with the advent of Amazon Prime, virtually anything that you’d want to buy can be delivered with free shipping and little or no hassle. Their growth has been huge, coming up on 50 million subscribers and 50% annual growth rates.

Online shopping has a large number of advantages over physical retailing, including the following:
1. Tax avoidance – in states with high sales taxes (in Chicago it is over 11%!) the shopper is able to avoid the tax by purchasing online. Theoretically there are barriers to doing this but in practical terms this remains a significant advantage of online commerce over physical commerce
2. Selection – an online store is able to offer a variety of sizes and styles that cannot be matched at the retail location
3. Lower operating costs – online retailers are able to minimize the costs of stores, managers and staff (many online retailers have some physical locations) relative to a competitor that primarily sells from physical locations
4. Ease of use – when online commerce was in its infancy sites were clunky and payment methods were difficult. The current online shopping experience via mobile, however, can be almost instantaneous and pain-free. What was once a “barrier” to online commerce is now a significant advantage vs. its retail competitor
5. Ability to customize – an emerging advantage of online retailers is their ability to customize products that must be mass produced for retail. A simple example is Apple offering engraving on their devices or Nike offering custom shoes; over time this advantage will become ever more pronounced. This could theoretically be countered by physical stores offering 3D printing but that technology and the supply chain needed to support this at scale is far behind the ability to customize from a central location and distribute via an e-commerce channel
6. Corporate tax minimization – the primarily online retailers have evolved from inception to minimize their tax payments through a variety of international strategies. The effective tax rates of the online retailers is far less than those that primarily deliver through physical retail, which is a compounding advantage over time

These “real” advantages are causing “second order” effects that accelerate this disruption even further, as follows:
1. Stock price and market value – online retailers are perceived as “growth” stocks and in turn receive higher multiples and stock values than their physical equivalents. Amazon and the Chinese online retailers have market values far and away higher than most direct-to-customer physical retailers, which in turn allows them to borrow at lower rates, make acquisitions, and hire talent which can be paid in equity. On the other hand, physical retailers are often plagued by activist investors, re-organizations, and other disruptive and negative events which make business more difficult
2. Declining store investment – as physical stores see commerce go online, they are forced to cut costs and make compromises in order to compete financially. This can be viewed in terms of run-down stores, empty shelves during peak times, and the ubiquitous self-checkout lanes which further depress customer sentiment.

While this process will take years to reach some sort of equilibrium, it is clear that mobile and ecommerce is ascendant while physical retail is declining. Given the wide variety of retail products, some will always be present and / or will evolve and thrive while many other ones will perish or be marginalized. This does not mean that “brands” aren’t important – this is a particular challenge between whether or not that brand will earn most of its money via physical stores or through e-commerce. 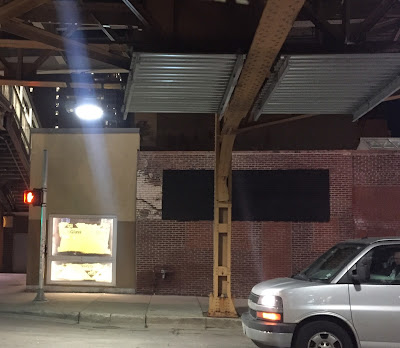 A physical manifestation of this shift just occurred in my neighborhood – the closure of a Wal-Mart store, the company that was once the unstoppable juggernaut of retail, sweeping up small retailers in its path. While Wal-Mart is still a giant company and will be with us for years to come, and is attempting a variety of strategies in order to compete, it remains a telling image.

To date no one has come up with a set of advantages for physical commerce that attempts to overcome the online advantages cited above. The best that has been attempted so far is to attempt to reduce those advantages by imposing barriers to the ecommerce retailers such as imposing retail taxes, attacking their lack of payment of corporate taxes, and using the press to highlight their poor treatment of employees in their warehouses. These sorts of strategies can generally only slow their erosion of market share and it is inconceivable that these trends can be significantly reversed.