Due to the fact that I live in Illinois which has been carved into districts to ensure Democratic majorities, my vote is mostly useless or a protest vote at best. I wrote about gerrymandering here and the fact that perhaps I live in the most ruthlessly gerrymandered district in the nation (and that is no small feat), the fifth Illinois house district, with our current representative, Ken Dunkin.

Recently I have been receiving a series of mailings for Ken Dunkin’s re-election, which is hotly contested. Currently in Illinois, the Democrats technically have a super-majority, meaning that they can unilaterally issue a budget (more or less) and raise taxes. However, not every Democrat “falls into line” with Mike Madigan, the speaker of the Illinois house, who is the true leader of the Democratic party in Illinois. Rauner is looking for Democrats who might listen to his message of reform or for some reason or another be amenable to working constructively with him (don’t want to speculate too long on why this might be, but you can probably jump to your own conclusion). Dunkin refused to show up for a vote that Madigan thought was crucial in September and conspiracy theories have him aligned with Rauner.

Per this article from the Chicago Tribune:

More than $2 million, an unprecedented sum for a legislative primary contest, could be spent between Dunkin, who has allied himself with Rauner against Madigan, and Stratton, who is backed by organized labor.

This is a ridiculous amount of money to spend on a primary race for a house seat for the Illinois legislature. Given the Democratic machines’ hold on this part of the city, it is accepted as a “given” that the Democratic candidate will win so all of the efforts go into the primary.

Thus my vote is now a precious commodity. Seemingly every day I get a giant, colorful, nearly insane flyer in the mail with the two candidates attacking each other. Here is a flyer stating that Ken Dunkin was convicted of abusing women and is unfit for office. 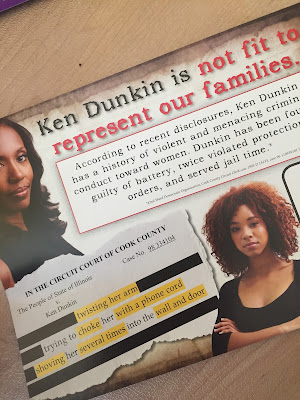 On the other hand, I receive flyers accusing Stratton of being a shill for Madigan, the “behind the scenes” despotic ruler of the Democrats who has essentially run Illinois into the ground. Since both candidates are Democrats, there is nary a discussion about businesses, competitiveness, or anything remotely representing capitalism. The only topics are how to get more money from taxpayers to “protect” the weak, which is apparently the only job of state government. 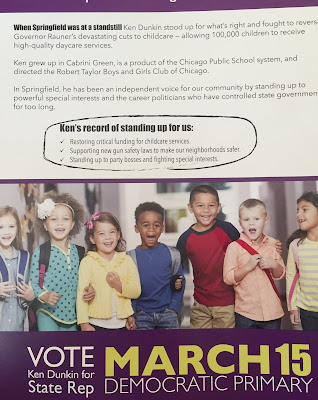 We even received an actual, personal phone call (we still have an old-school phone line) from Stratton where she left a personal message with our name on it on our answering machine. It was not a robo-call (unless it was super sophisticated) because it sounded personal and had our actual name in the conversation. We saved the message and listened to it a couple of times, incredulously.

Of course I need to vote for Ken Dunkin. We need this convicted wife beater to “not attend” the Illinois legislature periodically when Madigan calls in all his favors to try to override the Republicans. We aren’t asking anything more than for him to just not be present a few times a year – that’s not too much to ask, apparently.

In Illinois, in order to vote in a primary election, you have to select a party ballot. Thus in order to vote for Mr. Dunkin, I need to select a Democratic party ballot. Sigh. This will be painful for me but I don’t need to vote for any other Democrats except for Dunkin. Perhaps I will toss one in for ‘Bern because he is the less electable of the Democratic candidates in my opinion and if I can’t vote Republican at least I can try to harm the Democrats. Maybe I will scan through the recommended candidates from the Chicago Tribune for the Democratic primary and then vote for all the challengers. Or most likely I will vote for Dunkin and maybe the ‘Bern and walk out.

This is the essence of democracy in Illinois, just as our founding fathers intended it… to vote for a convicted wife beater on the hope that he will occasionally stay away from voting in the legislature so that Madigan can’t override the Republicans. After I cast that vote I likely will have a couple of stiff shots of liquor just to clear my palate from this dirty work.