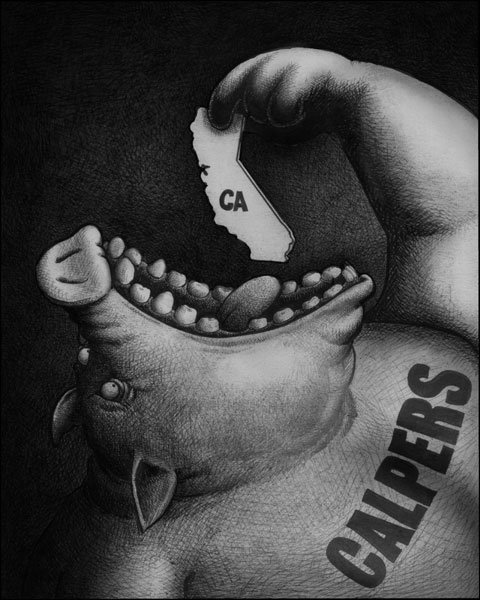 Barack Obama is fond of describing government this way.

As President Obama said the other day, those who start businesses succeed because of their individual initiative – their drive, hard work, and creativity. But there are critical actions we must take to support businesses and encourage new ones – that means we need the best infrastructure, a good education system, and affordable, domestic sources of clean energy. Those are investments we make not as individuals, but as Americans, and our nation benefits from them.

That was a reaction to Romney’s criticism of his silly comment.

I prefer the quote attributed to Washington.

“Government is not reason, it is not eloquence,—it is force! Like fire, it is a dangerous servant, and a fearful master; never for a moment should it be left to irresponsible action.”

Now, we see a new imposition.

The Department of Labor says its so-called fiduciary rule will make financial advisers act in the best interests of clients. What Labor doesn’t say is that the rule carries such enormous potential legal liability and demands such a high standard of care that many advisers will shun non-affluent accounts. Middle-income investors may be forced to look elsewhere for financial advice even as Team Obama is enabling a raft of new government-run competitors for retirement savings. This is no coincidence.

Labor’s new rule will start biting in January as the President is leaving office. Under the rule, financial firms advising workers moving money out of company 401(k) plans into Individual Retirement Accounts will have to follow the new higher standards. But Labor has already proposed waivers from the federal Erisa law so new state-run retirement plans don’t have the same regulatory burden as private employers do.

State run retirement plans. What could go wrong ? Well, we saw one version in Cyprus in 2013.

European leaders reached an agreement with Cyprus early on Monday morning that closes down the island’s second-largest bank and inflicts huge losses on wealthy savers.

Those with deposits of less than €100,000 (£85,000) will be spared, but those with more than €100,000 – many of them Russian – will lose billions of euros under draconian terms aimed at preventing the Mediterranean tax haven becoming the first country forced out of the single currency.

The deal is expected to wreak lasting damage on the Cypriot economy, which has grown reliant on offshore banking and Russian money. Analysts said Cyprus could see its economy contract by 10% or more in the years ahead.

CEOs have learned to keep mum in the Obama era, lest their companies be punished like J.P. Morgan after Jamie Dimon criticized some parts of Dodd-Frank. So it’s worth noting the candid reaction after a new Treasury rule scuttled the merger between Pfizer Inc. and Allergan PLC.

The companies ended their $150 billion tie-up after Treasury Secretary Jack Lew issued new rules that made it harder for companies like Pfizer to move to Ireland to legally lower their taxes. Pfizer will have to pay Allergan a breakup fee of $150 million, though Allergan shares are still down more than $10 billion since the Treasury ambush.

I am not a slavish advocate of corporate tax avoidance but we are in an era of confiscation.

“If the rules can be changed arbitrarily and applied retroactively, how can any U.S. company engage in the long-term investment planning necessary to compete,” Mr. Read writes. “The new ‘rules’ show that there are no set rules. Political dogma is the only rule.”

He’s right, as every CEO we know will admit privately. This politicization has spread across most of the economy during the Obama years, as regulators rewrite longstanding interpretations of longstanding laws in order to achieve the policy goals they can’t or won’t negotiate with Congress. Telecoms, consumer finance, for-profit education, carbon energy, auto lending, auto-fuel economy, truck emissions, home mortgages, health care and so much more.

Now, they want everyone to “invest” in state run “retirement programs.” CalPERS has not distinguished itself, except perhaps in corruption.

After spending years dogged by unpaid debts, California labor leader Charles Valdes filed for bankruptcy in the 1990s—twice. At the same time, he held one of the most influential positions in the American financial system: chair of the investment committee for the California Public Employees’ Retirement System, or CalPERS, the nation’s largest pension fund for government workers. Valdes left the board in 2010 and now faces scrutiny for accepting gifts from another former board member, Alfred Villalobos—who, the state alleges, spent tens of thousands of dollars trying to influence how the fund invested its assets. Questioned by investigators about his dealings with Villalobos, Valdes invoked the Fifth Amendment 126 times.

Well, it is California where Hispanics, especially illegals, run the state.

Last month the board of California’s new “Secure Choice” retirement plan wrote to state legislators about their “exciting win” in Washington. They reported that employers enrolling workers in the new government-run plan “would have no liability or fiduciary duty for the plan.” Score! The California bureaucrats added that “we have been given the green light to auto-enroll workers into an Individual Retirement Account (IRA).”

What could go wrong ? I expect Illinois will not be far behind.

7 thoughts on “Government, the things we do together.”