(Yes, I am working very hard on finishing up the third Luna City Chronicle – comedy, drama, diversion, small-town hi-jinks, and all … oh, and as an extra? Behold the logo for the Mighty Fighting Moths of Luna City, courtesy of my brother Alex, the graphics artist!) 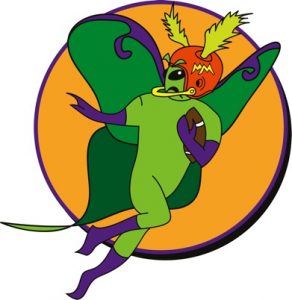 It was part of Richard’s gradual acceptance into the community of Luna City – as a pillar of the same in his office as manager/cook of the Luna Café and Coffee – that he take a turn in the old home economics classroom of Luna City’s secondary school teaching a necessary adult survival skill to twenty or so sixteen and seventeen year old students. The high school was named for Hernando “Nando” Gonzales, the legendary jet fighter ace of the Korean War and native son of Luna City; the adult survival skills course had been the mind-blowing stroke of genius on the part of Nando’s second cousin once removed, Geronimo “Jerry” Gonzales while serving as Luna City Superintendent of Schools. A series of adult experts offered an educational smorgasbord; household budgeting and basic income-tax return preparation, simple auto and household trouble-shooting, repairs and maintenance, First Aid … and Richard had been tapped for a week of cooking classes. The class met in a room which had been set up to facilitate cooking lessons, back in the decades when that meant cooking and sewing instruction for girls; five fully-equipped kitchenettes and a central instruction area with an overhead mirror over the prep-area and cooktop. Richard felt oddly at home on the very first day, although it was jarring to be addressed as ‘sir’ or Mr. Astor-Hall. And he felt terribly old, when he made a reference to Graham Kerr, the Galloping Gourmet, on the very first day, and had to explain it to a roomful of baffled teenagers.

“I could do a two-week segment, next semester,” he remarked to Jess Abernathy, at mid-week, when they had their regular management consult. “They’re a very promising lot. I had a brilliant inspiration, regarding roast chicken; you know, start with preparing a basic whole roast chicken with basic herbs and lemon on the first day, then move through several different recipes incorporating the leftover cooked chicken … simple dishes, exploring various cuisines … and then finish up with using the bones to make a stew, with dumplings. Tasty, economical, simple; what do you think?”
“The kids will eat it up,” Jess said, and Richard replied, “Well, of course – that’s the whole point. D’you think I could offer an internship over the summer to one or two of the most promising?”
“You’d have to pay them at least as much as they would earn, bussing tables at Mills Farm,” Jess warned him. “We’ll look at the finances at the end of this year, see if it can be done. I’m glad you like doing a part of the class, Rich – I was afraid you’d regret it as a waste of time.”
“Teaching someone to cook for themselves is never a waste of time,” Richard answered with adamantine conviction. “Every creature on earth eats – but cooking your food and cooking it well is the foundation building-block of civilization.”
“Well, when you put it that way,” Jess laughed. “Hey, if you happen to see Romeo this afternoon – remind him about the costume rehearsal tomorrow at the Pryor’s. Kate is going to come and take pictures of the main characters for the newspaper and website, so it’s absolutely important that everyone be there.”
“So he did get convinced to be the groom?” Richard had almost forgotten about the Luna City Players’ benefit event to rebuild the church parish hall, free of the twin scourges of black mold and asbestos; an event which involved staging a terribly dramatic mock-wedding with all the required and traditional trimmings.
“Of course,” Jess giggled. “Patricia is terribly persuasive, and Romeo has always been putty in the hands of strong-minded women who don’t want to sleep with him.”
“He’s also putty in the hands of those who do,” Rich said – for yes, the velvet-black Merc had made occasional appearances, discretely parking on the far side of Romeo’s Fifth-wheel, and the gossip that he couldn’t help overhearing in the Café of a morning, had it that Susannah and Romeo spent many an evening and into the wee hours, honky-tonking in various bars and dance halls in Beeville, Karnesville and even as far afield as Victoria. To his relief, Susannah appeared to make every effort to avoid being seen, especially by Richard, although Romeo had jovially thanked him for the semi-introduction, and leered in quite a disgusting manner when he added, “If the trailer is a-rocking, then don’t come knocking!”
“Point taken,” Jess looked amused. Yes, she must also have heard the Café gossip, although since she and Joe Vaughn were an established couple, this intelligence may have come to her via pillow talk. “Yes, if you want to teach a two-week session next semester, I’m sure Jerry will approve.”
“They’re nice kids,” Richard admitted, feeling somewhat foolish that he had never had much to do with the sub-adult specimens of his species since he ceased being one of them. “I’d like to see them off to a good start in life.”
“So do we all.” Jess gathered up her spreadsheets and receipts. “So do we all – since they’re the ones who will be managing our assisted-living residences.”

The adult-skills class was the final regular class of the day, which ended at 3 PM. Richard rather liked it, since it let him put full-time at the Café, and added an extra fillip to complete his working day. The final bell dismissed the class – and he was unexpectedly touched to see that most of the kids departed rather reluctantly, rather than jetting out the premises at full speed, a handful of them lingering to ask very specific food-preparation questions which suggested they were going to go right home and attempt them there that every evening.
Which he thought was all to the good – given his fake biography which involved fixing meals for a mythical starving and neglected family of younger brothers and sisters, and his real-life experience, in cooking for his parents – all pleased and appreciative they were, although some of his early experiments with fusion cuisine were not all that successful. Although his parents were, if anything, sporting about it, since they ate the results with a becoming show of pleasure. He went out the back of the school to where he had left his bicycle leaning against a handy rack, thinking again of how much he owed his parents.
He was mildly surprised, therefore, to observe two Luna City Police department vehicles (about half the force, until there is sufficient funding to purchase a fifth SUV) parked around in back of the school, in a sweep of gravel by the auto hobby shop enclosure, the gymnasium and the field house which served as an overflow parking lot when the Moths played home games. And he noted, with a rising feeling of disquiet, that the Walcott’s blinged-out Humvee with all the extra add-on features was also parked next to a battered panel van with the logo of the popular local conjunto band, Los Maldonados, stenciled on the sides.
As he took up his bike from the rack where he had left it – for no one locked their bicycles any more than they locked their doors in Luna City – he heard Sook Walcott’s steam-whistle shriek of outrage, emanating from the direction of the double doors to the gymnasium, followed very shortly by the pint-size domestic terror herself, dragging her teenage daughter Belle by the arm in one hand and flailing blows in the direction of a dark-haired teenaged boy with the other, while two civilians – Coach “Music Man” Garrett and an older Hispanic man whom Richard didn’t recognize, but who was in the customary performance garb of Los Maldonados, as was the boy and Belle Walcott – and Joe Vaughn with three of his officers attempting to reason with the infuriated Sook.
“You no canoodle with crummy musician!” Sook shrieked at top decibels and her distraught daughter wailed in response, “Mom! Javi wasn’t doing anything!”
“Mrs. Walcott!” That was Coach Garrett, mild, middle-aged musician and football coach for the Luna City Mighty Fighting Moths, who hadn’t won a game against any of their division opponents in three decades, although the Moths Marching Band, under his exacting tutelage were state and national champions in the marching band sweepstakes several times over. “Mrs. Walcott, please – calm down and listen to me – there was no impropriety here, we were finishing up Belle’s audition tape for ….”
“My daughter not be crummy musician!” Sook screamed, unappeased. “She go to proper college, perfect SAT! No canoodle with stupid musician boy!”

(To Be Continued — of course! Book 3 of the Chronicles of Luna City will be out at the end of September, in print and ebook versions.)