As smartphones become more powerful and more connected there are subtle phenomenon that are very powerful that can go by unnoticed. For years I either walked to work or took public transit but now in the Pacific Northwest I commute by car. Since the surroundings are new I pay much more attention to what is going on than I used to in Chicago.

In Chicago, there aren’t a lot of opportunities to optimize your travel if you are driving alongside major roads such as I290 or the Dan Ryan. Unless you really, really know what you are doing it is not recommended to get off the highway in many Chicago neighborhoods and just to follow your mobile navigation blindly. Thus in Chicago when I was in bad traffic it pretty much looked like this – a speed of zero and stuck crawling ahead. 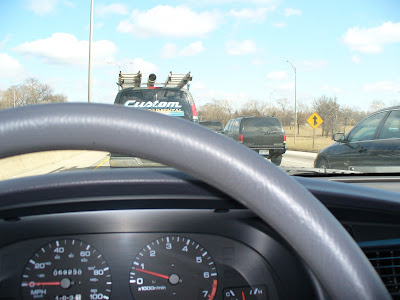 The first generation of car navigation tools told you how to get somewhere with the most efficient route, taking standard traffic into account. The new generation of navigation apps, however, have real-time information and continuously re-adjust the “recommended” route based on traffic, accidents and construction.

In Portland the navigation apps (through bluetooth and my radio, so I am not handling them directly) frequently direct me off the main road and onto side streets. Since violent crime is miniscule here (compared to Chicago) I often take up Google Maps (which gets a lot of real-time and accident information from Waze) on their offered routes and go skittering through local neighborhoods off the highway towards home.

What is fascinating to me is often how rapidly the navigation apps cause a “wave” of activity as everyone receives a real-time traffic update simultaneously. I can see a lot of cars pull off on exits prior to downtown (likely due to an accident up ahead) and start taking side roads as their apps direct them to do so. If you would have framed this out twenty years ago, it would seem like something out of science fiction:

Imagine a world where a centrally directed super computer controls car navigation for millions of autonomous automobiles and directs them to their unique destinations in the most efficient manner, calculating construction, traffic and accidents on a continuous basis.

This world exists today, in cities where it is feasible to exit the highway and use alternative routes to your destination. And the central supercomputer is either Apple Maps or Google Maps (or some of the newer auto navigation systems that incorporate real-time activity) and the receiver is found in every mobile phone around the country, which in turn is connected to your stereo to guide you with a human voice to your destination.

What is also interesting to me is whether or not at some point the apps themselves need to “predict” how their directions will in turn impact downstream events. For example, at the time the accident occurs, the main road slows down, and then it recommends that cars pull off the highway and onto side streets, which are relatively open at the time of the event. However, as soon as this recommendation is made, waves of cars follow the recommendation and all of the sudden the secondary route becomes more congested (and slower), which to some extent negates the original instructions received. Do the apps in turn have to “estimate” what percent of cars on the road will accept their alternative instructions, and adjust the times accordingly? In a more advanced world (very possible), Google probably uses the car by car information to see if individuals accept the new route and probably adds this probabilistic determination into their analysis.

This sort of problem is analogous to automated trading, where you not only have to predict what criteria cause you to buy or sell, but you need to anticipate what other market participants will do at the same time (second order effects) for optimal results.

Another interesting element of this is that we can more efficiently use our infrastructure of roads if these effectively centralized dispatch methods cause us to optimize all routes simultaneously. I am certain that many individuals on formerly quiet roads curse these car apps since their neighborhoods now are flooded with “through” traffic on days where the main arteries are clogged with traffic. This is conceptually similar to the “capacity utilization” problem which says that the most efficient way to leverage assets is to use them all the time, since many of them are idle most of the day. These mapping apps go a long way towards leveraging all the available assets which in turn reduces their average cost across all users (as taxpayers, at least).

17 thoughts on “The Hive Mind”