Since I eat out a lot and have frequented restaurants of every stripe over the last few decades I am always interested in restaurant efficiency. The restaurant industry is brutally competitive and it always disturbs me when I eat at a restaurant and enjoy it but then fear that the restaurant won’t survive because it lacks a critical mass to make enough money. 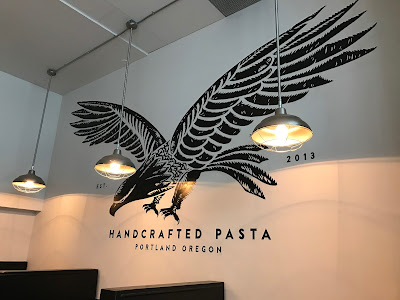 These restaurants serve high-end food (not luxury cuisine, but far from fast-food) and alcohol but have communal tables and always seem to be packed with a line out the door. They are different because their menu is a large signboard (dishes are frequently updated) when you enter the space and you order your food at a central register and they hand you a “flag” to bring with you to your table. Then when your food is ready, they bring it out to you and take away your flag and you eat your meal. Drinks are brought out first (and appetizers) and you can also flag down one of the servers to order more drinks (although most people tend to have one drink with their meal and then leave, based on a few times that I’ve sat at the restaurant). You can also order your food “to go” at Grassa, as well.

This model drives peak efficiency at the restaurant. There are many fewer tables than you would need at a “standard” restaurant due to the communal standing tables and the food comes out as soon as it is available (the servers don’t have to take orders, they just serve the food as soon as it is up and return back to the kitchen area, unless they are bussing a table that just left). They don’t have to take reservations or mess with any of that complexity, either.

Customers tend to eat and go since they’ve already paid for their meal (on the front end) – they don’t have to wait for the waiter to bring them their bill and to settle up. This is very efficient on the “back end” of the process. The restaurant doesn’t have to worry about missed reservations because they don’t take reservations in the first place.

All of this would be moot if the food wasn’t very good, but Grassa serves excellent pasta and various associated Italian dishes and appetizers and salads. We haven’t had a bad meal there yet.

At a high level, here are the efficiencies that this restaurant drives over the “standard” model:
1. Use of the “order first, pay first” model means that they need far fewer servers in the restaurant since taking orders and accepting payment are two primary tasks of these employees
2. The average time a patron takes up a seat is far lower because the time from seating to taking the order and getting it to the kitchen is eliminated as well as the time to receive a bill and settle up the payment
3. This model eliminates the reservation model, which reduces complexity (and accompanying employee roles) and also eliminates the loss from waiting for patrons that are either late or who do not follow through on their reservations at all
4.The food arrives to patrons faster and hotter since the servers are primarily driven to serve it quickly since they do not take orders
5. From the perspective of a customer, the tip is often less because you are paying up front and getting the food delivered. Maybe this is controversial and you are supposed to tip “the same” but I saw a tip jar with a few dollars in it and I don’t think very many patrons tip in this model
6. The fact that the restaurant has communal tables, faster turn-over and less total employees means that you can thrive in a smaller space and on a smaller investment, and your break-even point is lower

What are the downsides of this model? Here are my speculations:
1. Patrons order less alcohol, and alcohol is often the key driver of profitability in any bar or restaurant. I’ve seen various places on the internet where they say the margins on drinks (just taking into account the cost of alcohol) is as high as 80%
2. Not having reservations as an option is going to scare off some people who don’t have a lot of time for dinner and don’t want to wait around. Since they don’t have an attached bar, there isn’t a place for people to drink while they wait in line. Likely some sort of future enhancement would be to let people get in a “virtual” line (likely waiting for table space if the restaurant is packed) after they check in if they were nearby, could be powered by a smart phone text (I’ve seen this elsewhere)

All in this seems to be a winning model for a medium to semi-high end restaurant. Restaurants already do the self busing method on the low end (McDonalds) and Chick-fil-A has a pretty cool method where they give you a cup and bring out your order to reduce the line and waiting near the central cashiers and kitchen.

11 thoughts on “Efficiency and Restaurants”