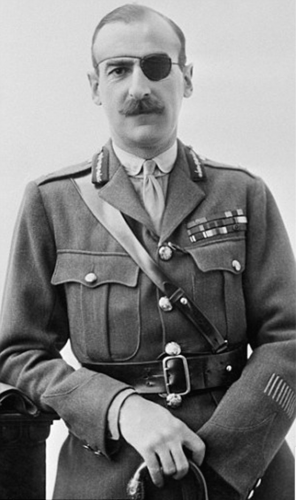 Carton de Wiart was wounded a grand total of 11 times; twice in the Boer War, once in Somaliland and eight times on the Western Front. Two of these injuries resulted in serious impairments: the loss of his left eye, and the loss of his left hand. He was shot in the face, head, stomach, ankle, leg, hip, and ear. He tore off his own wounded fingers when a doctor refused to amputate them. For many years after he had been wounded in the First World War, pieces of shrapnel were being taken from his body.

He summed up his experience in the First World War: “Frankly I had enjoyed the war.”

Carton de Wiart started his service as a Trooper in the Middlesex Yeomanry during the Boer War. He was gazetted into the 4th Royal Irish Dragoon Guards in India in 1902 and was later seconded to the Somaliland Camel Corps with whom he won the DSO in 1916, losing his eye in the process. After returning to the 4th Dragoon Guards in Flanders, he was severely wounded and lost his left hand whilst in action near Ypres. On recovery, he returned to France, was given command of the 8th Battalion of the Gloucestershire Regiment and whilst commanding them during the fierce fighting at La Boiselle on the 2nd/3rd July 1916, he was awarded the VC. His citation reads:

“He displayed conspicuous bravery, coolness and determination in forcing home the attack, thereby averting a serious reverse. After the other Battalion Commanders had become casualties, he controlled their commands as well, frequently exposing himself to the intense barrage of enemy fire. His energy and courage was an inspiration to us all.”

After recovering from further wounds he was given command of 12th Brigade.

During the Second World War, Carton de Wiart served first as Head of the British Military Mission to Poland until its collapse, this was followed by command of the Central Norwegian Expeditionary Forces in its hopeless attempt to hold Trondheim. A year later, he was sent to head the Military Mission in Yugoslavia but on the way, his plane crashed into the sea and after swimming ashore he was made a prisoner of the Italians. In August 1943, the Italians released him and sent him to Lisbon to negotiate their surrender terms. From October 1943 until retirement in 1946, he was the Government’s Military Representative with General Chiang Kai-Shek in China.

Carton de Wiart is the basis for the character Brigadier Ben Ritchie-Hook in Evelyn Waugh’s Sword of Honor trilogy.

His eyepatch and missing hand caused him to be known as “Nelson” to his troops.

“Governments may think and say as they like, but force cannot be eliminated, and it is the only real and unanswerable power. We are told that the pen is mightier than the sword, but I know which of these weapons I would choose.” 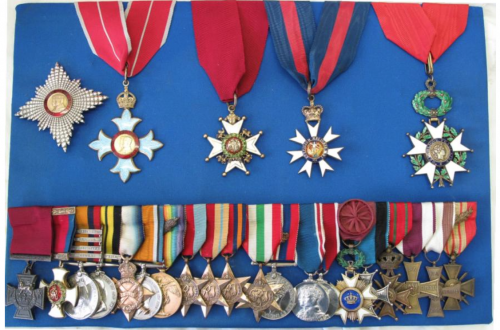