Recently I re-located to Portland, Oregon. While Portland has a reputation as a rainy, gloomy place, we had a great April through November, with lovely and mostly sunny weather. In December, however, things have taken a turn for the worse.

I grew up in the Midwest where it snows all the time. The difference, however, is that we salt our roads and plow them with vigor. This wikipedia article shows the “salt belt” of states that use this method; Oregon is not one of them.

While snowfalls are infrequent in Portland (some parts of Oregon see immense snowfalls… like this town and anywhere near Crater Lake) we have already had 2 “major” snowfalls that snarled traffic to an inordinate degree – the city ceases to function and everyone stays home when they heed the weather warnings (if they turn out to be accurate). On Wednesday, however, the snowfall and ice occurred during the evening rush hour and caused chaos with hundreds of abandoned cars litering the streets and highways. Commutes that would take 20 minutes could take 4 or more hours; many (including myself) went on foot. 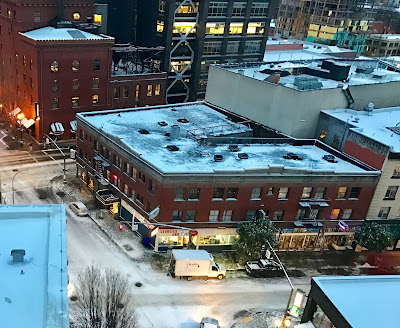 Streets were still icy and treacherous a day later, since the temperature remains below freezing. Cars that drive were generally either all-wheel drive, trucks, or used chains. I had to buy a pair of chains for my Jetta for $85 but I hope to never need to use them.

When the streets get icy / snowy they are generally impassable to most cars due to the fact that the area is very hilly which makes whole neighborhoods inaccessible. The city center is low lying and flat but you need to cross hills to get almost anywhere else and that’s where the danger is greatest.

Many folks in Portland bicycle or take public transportation. The system is extremely stressed, since many bus routes don’t run and those that remain use chains which means that they are very slow and limited by the pace of traffic and all of the abandoned vehicles blocking streets. The trains, on the other hand, were viewed as very reliable – but this didn’t prove to be the case since frozen switches led to delays on the major train lines (that’s what they announced to us anyways). I watched as nine westbound trains passed until a single eastbound train finally arrived. I was standing out on a freezing cold platform for over an hour, waiting, along with dozens of other hapless commuters. 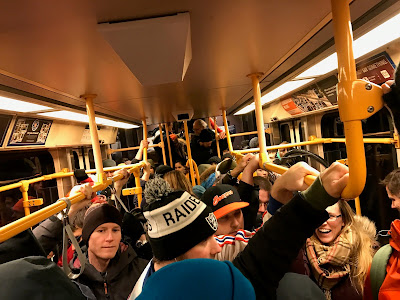 When we did get on the train it was completely and utterly packed since it was the first east bound train (we were told that there was a mostly empty east bound train right behind us, but no one wanted to get off and risk it and wait for it to arrive). People would hurl themselves onto the train at every stop, making it even harder for those that wanted to get off. Since this is Portland, most people were friendly and not panicking and making a bad situation even worse.

It seems ridiculous that only an inch of snow can completely snarl a major metropolitan area and bring it to its knees, but that is absolutely the case. There are drawbacks to dealing with salt (massive corrosion and impact on wildlife) but the risk to human life in the cold due to accidents and cars being abandoned and parents unable to pick up their kids from school seem to be much more significant, in my opinion. Since this is the second major storm of the season (and it is only December), perhaps Portland will need a better plan than “stay home” every time the weather gets bad.