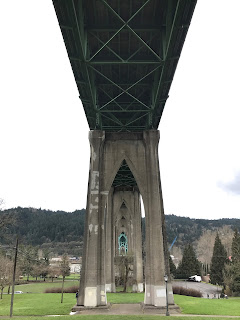 Portland is a city of bridges.  These bridges were mostly built long ago, when construction projects were feasible in terms of costs and delivery time frames were measured in years, not decades (when approvals, funding, environmental contingencies, etc… are factored in).

Today the Portland metropolitan area, which includes large Washington communities north of the city, faces severe constraints on traffic and there is widespread local agreement that commute times are growing longer and in some instances intolerable.  I know individuals in Chicago, LA or NYC that would laugh at commute times that aren’t 2+ hours but that is little consolation to the locals who previously had been able to drive around the metro area with relative ease.

Many of these bridges need to be replaced for multiple reasons – the Pacific Northwest is an earthquake zone and most of these bridges are not built to survive a quake, traffic on the bridges is soaring and causing delays throughout the system because they function as bottlenecks, and frankly bridges cannot last forever without collapsing.

And yet… it will never happen.  I am confident that we won’t be able to raise the billions that it will take to build these bridges and lawsuits and environmentalists would create innumerable roadblocks (with accompanying cost increases and delays) so that even difficult projects will become impossible. There is an utter breakdown in funding, public will, solid execution, and all the fundamental components that make infrastructure possible.  While China has built giant, soaring cities, we can’t even replace bridges and roads built 100 years ago.

I would be willing to bet large sums of money that none of these bridges will be replaced over the next decade with actual drivers using the roads and seeing the benefits of the billions that would need to be invested.  There will be a lot of talk and likely hundreds of millions spent on studies and much political posturing and probably some desperate repairs on some of the bridges that will soon be in dire condition.  But it is easy money to bet that nothing new and substantially better will rise through this cacophony and come to fruition.

America would be much better off if we faced the facts that what we could do in 1931 we simply cannot do today.  Then we could ask deeper questions about what happened and how we can truly solve these sorts of difficult questions.  We would need reform in contracting, new productivity enhancements, certainty in our regulations, local industry that was capable and cutting edge, and goodwill with the public to put up with disruptions and compromises that inevitably accompany this sort of work.

Like the failed nuclear power renaissance, which I’ve chronicled many times, the fact that I know that these efforts will fail doesn’t make me a naysayer, just a realist.  Avoiding facts and having beliefs unsupported by tangible evidence and relying on recent events for predictive power is foolish.  We can’t tackle our problems unless we address them out loud and accept that we are failing and our processes and systems are completely broken.  Else we are living in a dream world.

54 thoughts on “US Infrastructure Will Be Broken Forever”