I was listening to “Boneyard” the XM Radio station whose one-time motto was “the station of road-trippin’ and binge drinking” and they said that “The Number of the Beast” by Iron Maiden was turning 35 years old. In that moment, I felt old, too.

“The Number of the Beast” is the first album by Iron Maiden featuring singer Bruce Dickinson with his soaring vocals. The prior singer, Paul Di’Anno, had a much lower, punk sort of voice range that was a bit less commercially successful. This was also the album that made them giant in the United States, with their videos such as “Run to the Hills” being played incessantly on MTV. 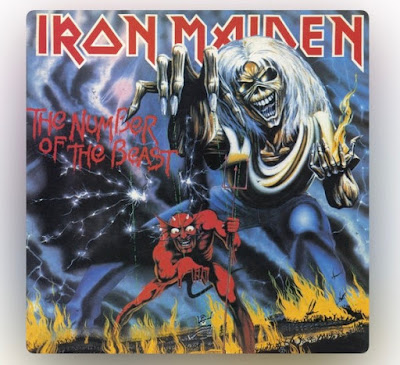 I took a snapshot of the album cover from Apple Music on my iPhone – I’m sure that somewhere there is a cassette, album, and CD of this disc somewhere that I’ve purchased and lost over the years. This is one of their best covers, with the mascot “Eddie” pulling the strings on the devil (who has his own little Eddie on a string).

After hearing that it was 35 years old, I put the album on the playlist and listened through it again. The album is full of classic songs, particularly “The Number of the Beast”, “Run to the Hills”, “Hallowed Be Thy Name”, and “Children of the Damned”, although I can pretty much sit through the whole album front to back. These songs are also the cornerstone of Iron Maiden’s setlist, being played even today at giant concerts featuring tens or hundreds of thousands of new, younger fans.

This album is routinely cited as one of the top metal and hard rock albums of all time. I was enthralled by the difficult time signatures and prominent bass of songs like “The Number of the Beast”, which starts out in 5/4 time and definitely has a different feel to it than most songs I was hearing in that era.

The album also used various voice-overs, such as the beginning of “The Prisoner” and of course the classic intro to “The Number of the Beast”. I think I carved that intro into a desk somewhere during an interminable study hall break during high school.

Iron Maiden is one of those bands that you would not think would remain so utterly popular across generations of fans, and yet they continue to fill stadiums and win over new metalheads every day with their live shows and vast collection of albums. At the time when this album came out there were protests over the imagery but nowadays this sort of stuff is tame by any standard.

Put on their classic album and hoist a beer for Iron Maiden! We’re old…