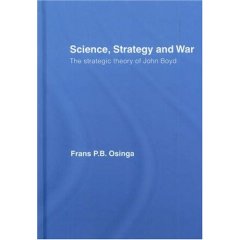 Despite having been an influential and controversial figure inside the Pentagon, the late Colonel John Boyd has only recently come to wider public attention due to the excellent biography

written by Robert Coram. Even so, much of what the public knows about Boyd relates to popular anecdotes of his connection to the F-15 and F-16 fighters and Boyd’s consultancy to then Secretary of Defense Dick Cheney on the eve of the First Gulf War. Of Boyd’s ideas, the best known would be the OODA Loop (Observe, Orient, Decide Act) which has become a fairly widespread diagram in military literature and also in business management courses where competitive decision making is emphasized. Other than that, the corpus of Boyd’s work is well known only to a relatively small number of collaborators, reformers, theorists and military professionals who had been personally influenced by Colonel Boyd.

This was partly Boyd’s own fault. A tireless briefer and formidable mentor, Boyd wrote only a few papers and never attempted a magnum opus, preferring to evolve his thinking through the intellectual give-and-take of briefing sessions, deep reading, discussion and reflection. While Boyd’s slides remain readily available online at DNI and Belisarius.com, the context that Colonel Boyd created when he gave his talks is not always obvious to the viewer. As a result, a summative statement and analysis of Boyd’s strategic theory had been lacking until now.

Science, Strategy and War: The Strategic Theory of John Boyd

by Colonel Frans P. Osinga has filled that breach. A meticulous study of the origins and meaning of the ideas of John Boyd, Science Strategy and War has been endorsed as “The book John Boyd would have written” by no less than William Lind, a Boyd collaborator and the “Father of Fourth Generation Warfare”. As such, Science, Strategy and War is the most complete exposition of Boyd’s ideas that we are likely to see for some time to come.

But what are those ideas? Are they as valid and important a contribution to the art of war as Boyd’s defenders and biographers claim? Do they have relevance in today’s wars or offer wider application beyond military strategy? Has Dr. Osinga gotten to the heart of the matter in his book, Science, Strategy and War ?

These are the questions, among others, that this roundtable will attempt to answer. Our reviewers are an impressive group who will tackle John Boyd and Frans Osinga’s treatment of him from a variety of perspectives. To introduce them (some prefer to blog with varying degrees of anonymity and I am respecting that):

William F. “Wilf” Owen – A military writer and Editor of The Asian Military Review. A military theorist with a special interest in tactical doctrine. Wilf Owen served for twelve years in the British Army and is a member of the Small Wars Council.

We are also very pleased to have an author’s rebuttal/response at the conclusion of the reviews, from:

Please feel free to join in on the discussion in the comments section whether you are a reviewer or not, a military buff, skeptic or are simply curious about John Boyd and Science, Strategy and War.

Next up, our first review.

ADDENDUM – Other Links of Interest:

“Where Boyd Got the Discourse” by Dr. Chet Richards

Click here to view all posts in this discussion.

2 thoughts on “Osinga Roundtable on Science, Strategy and War: Introduction”