Blitzed is a book by Norman Ohler about drugs and Germany during WW2. The book also appears to comprehensively demonstrate how these drugs impacted military tactics and operations for the German troops and also how they altered strategy at the highest levels. 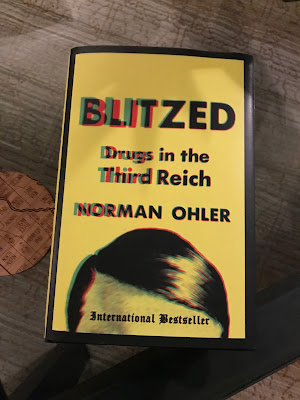 From a tactical and operational perspective, I can see how the narrative of the use of drugs to push troops to move faster and work at night aligns with my understanding of the early years of WW2. The Germans did cover ground rapidly during the early years of the Blitzkrieg and absolutely outfought the Allies (overall) at night. They also managed more sorties for their air force per plane and were more effective at leveraging their military assets (also through battlefield recovery at night of damaged equipment). Compared to WW1, especially, the distances that the German troops covered during the Blitzkrieg phases of 1939-41 were amazing and their combat power remained strong.

From a strategic perspective, the book attempts to align the delusional attack known as “the Battle of the Bulge” in late 1944 to the use of drugs by the supreme commander, which would account for his thoughts that this shock attack could break the will of the Allies to fight. This is an interesting line of thought and if we had perfect information we would attempt to match the various drugs he was prescribed on top of the decisions that were made during different battles and campaigns during WW2.

I have seen a number of reviews of this book and most of them seem to think that there is a strong basis of fact. However, there are often bitterly contested reviews, especially with regards to the more sweeping generalizations that were translated as “everyone was on drugs”. Those discussions, to me, are more of a “corner case” of the key findings related to 1) the impact of drugs on the combat power of early war German formations 2) the impact of drugs on decision making at the highest levels of command. I would love to hear from other authors interested in this topic to see how it aligns with their opinions.