Traditionally the big companies that handle “last mile” package delivery are Fed Ex (ticker: FDX), UPS (ticker: UPS), and of course the US postal service. These companies have hundreds of thousands of employees (often unionized) and billions of dollars of planes and trucks and other transportation assets.


Amazon (ticker: AMZN) recently began expanding their transportation capabilities, both in the form of their own airplanes and leveraging an “Uber-like” workforce of contractors leveraging an app to deliver packages in their own cars with a program called “Amazon Flex“. 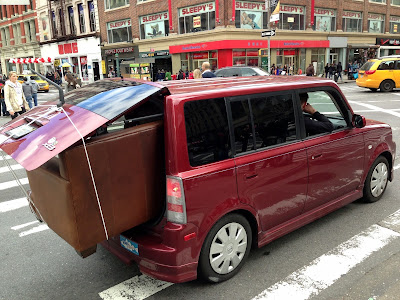 This article on Geek Wire describes someone’s experience with being an Amazon Flex driver for 2 days. It is very interesting how he just downloaded the app, passed a background check, and showed up at the facility and picked up his packages. Customers were surprised just to see a regular guy doing the delivery and he rang the doorbell often and talked to them as he did his rounds at night.

Amazon Flex, like other gig economy services such as Uber or Postmates, provides people with an easy way to make some cash. Signing up is simple; the work isn’t too demanding; and you get paid within a few days.
Amazon says you can make up to $18-to-$25 per hour. After subtracting costs of gas; parking/tolls; smartphone data usage; and wear and tear of your car, the pay seems to be a little more than minimum wage

UPS spokesman Dan McMackin told Gizmodo that Amazon is not a threat to UPS—whose drivers are both full employees and the single largest contingent of long-lived Teamsters labor union—because “ecommerce is bigger than one customer.” In his opinion, good courier work requires a skilled, consistent workforce, and retaining that pool of labor means providing solidly middle-class wages and benefits.

This service by Amazon seems like it will be a significant challenger to UPS and Fed Ex. By paying near minimum wage with no benefits AND having no fleet or fuel costs Amazon seems to have a service that would be able to significantly undercut these other transport companies. In addition, the Amazon service can “scale up” to meet demand and then scale back during slow periods at no cost, while their competitors have to build capacity in terms of staff and equipment that is essentially idle during slack conditions.


Seeing what Uber did to the cab industry, the smartest action by the (mostly unionized) competitors would be to try to block this service in court and burden it in red tape and other regulations by using their legislative connections in congress at the local, state and Federal level. Clearly, delivering packages isn’t a complicated business with the advent of modern technology and a company the scale of Amazon and once this sort of service becomes ubiquitous and benefits consumers (in terms of lower costs) it will be very difficult to put this genie back in the bottle.