Recently I was at Powell’s bookstore In Oregon when I came across this book which attempts to be an introduction to the complexities of taxation. I thought that this was in the spirit of what I was going to try to do as I start to review the 2017 Tax Reform act and its’ myriad impacts on the economy and individual incentives. 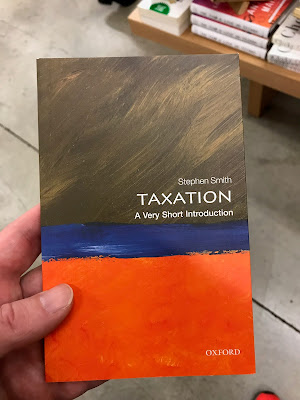 As an individual investor, I started with looking at capital gains and investment income. Some thoughts:

2. The tax rates for capital gains are 0, 15% and 20%. These are the same as under the previous tax laws.
Here is a brief article from the Motley Fool

3. The rates on ordinary income have gone down a bit, so the average person would pay less on gains, all else being equal (but this gets into your state and the standard deduction, a different topic). Thus there is no significant impact on investments here, it should be slightly favorable

4. Although there was talk of changing the way stock sales are accounted for to limit “tax loss harvesting”, these changes did not occur. I believe that you can still deduct up to $3000 in losses against ordinary income, but I haven’t been able to find that yet to confirm either

6. While there were changes throughout the code that impacted REITS (real estate limited trusts) and MLP’s (Master Limited Partnerships), these changes didn’t fundamentally impact their value to classes of high income investors (they still have favorable tax characteristics)

7. There was some discussion of eliminating the Federal tax free nature of municipal bonds, but that deduction remained intact

8. There also was some discussion of changing the 401(k) deductions; this too, remained intact


Thus for investors, the basics of investing for individual investors (not the super wealthy) and the impact of taxation did not see significant changes under the new tax law. The types of tactics you would use under the prior tax law mostly moved into the new environment intact.