Before there were electronic digital computers, there were mechanical analog computers. Although now obsolete for practical computation, these devices might actually have an useful future ahead of them–in education.

Mechanical analog computation (analog means that calculation is done by measuring rather than by counting) goes back to the Greek Antikythera mechanism (65 BC), which was used to predict the positions of heavenly bodies. The modern era of analog computing began with the work done by James Thompson and his brother William (Lord Kelvin) in the 1870s. First, James Thompson created a mechanical device that performs the calculus function of integration.

Lord Kelvin applied this device…along with other mechanisms for addition and trigonometric functions…to create a mechanical tide-prediction system. These tide predictors had a pretty good run: the invention was announced in 1876, and some of these systems were still in use in the early 1970s!

For those who haven’t studied calculus, integration can be thought of as a kind of continuous addition.  Imagine a hose with a fluctuating flow rate filling a pool: by integrating the rate of flow, you can calculate the volume of water added to the pool.

The basic concept of a mechanical integrator is shown below. 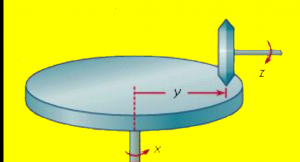 If the vertical shaft is turned at a constant rate, and the small wheel is moved in and out according to the changing value of some some variable Y, then the rotation of the horizontal shaft Z will represent the integral of Y with respect to time.  If Y is the rate of flow of the a hose, Z will be the total volume  added to the pool. If Y represents the acceleration of a vehicle, then the output shaft will give that vehicle’s speed at any moment.  Connect the output to the input of another integrator, and you will get the distance traveled.

Vannevar Bush, who would become Roosevelt’s science adviser during WWII, combined the integrator and other computing mechanisms to create a highly general mechanical computer, called a differential analyzer. Completed in 1931, it was not restricted to a single application, but could be programmed–with a wrench and screwdriver to alter the connections–for a wide range of problems. Complex chains of calculation were possible, including the ability for a result at one stage to be fed back as input at an earlier stage–for example, the speed of a simulated vehicle affects its air resistance, which in turn influences its acceleration…which integrates back to its speed. 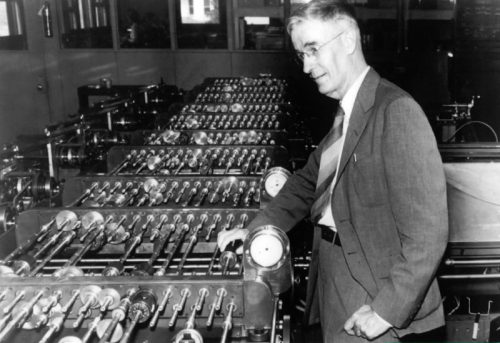 Other differential analyzers were built in the U.S.,  Norway, and Britain, and were used for applications including heat-flow analysis, electrical network stability analysis, soil-erosion studies, artillery firing table preparation, and studies of the loading and deflection of beams. It is rumored that a British analyzer was used in the planning for the bouncing-bomb attack on German hydroelectric dams during WWII. Differential analyzers appeared in several movies, including the 1951 film When Worlds Collide  (video clip). The ultimate in mechanical analog computation was the Rockefeller Differential Analyzer, a rather baroque (and very expensive) machine built in 1942. It was decommissioned in 1954, on the belief that the future of calculation would belong to the electronic computer, and especially the electronic digital computer.   Following the decommissioning, the mathematician Warren Weaver wrote:

It seems rather a pity not to have around such a place as MIT a really impressive Analogue computer; for there is vividness and directness of meaning of the electrical and mechanical processes involved… which can hardly fail, I would think, to have a very considerable educational value. A Digital Electronic computer is bound to be a somewhat abstract affair, in which the actual computational processes are fairly deeply submerged.

Vannevar Bush himself wrote about the machinist who had helped in construction of the original differential analyzer:

I never consciously taught this man any part of the subject of differential equations; but in building that machine, managing it, he learned what differential equations were himself … it was interesting to discuss the subject with him because he had learned the calculus in mechanical terms — a strange approach, and yet he understood it. That is, he did not understand it in any formal sense, he understood the fundamentals; he had it under his skin.

Not just integration, but other mathematical operations as well, have mechanical interpretations which could be useful for development of conceptual understanding.  Addition is done by a differential, which combines the rotation of two input shafts into the rotation of a common output shaft.  A mathematical function can be mechanized with a cam…math textbooks sometimes try to explain the concept of a function in terms of an abstract “function machine”….with the differential analyzer, the abstraction becomes concrete.  Mechanical multiplication, too, can be provided and is useful in developing conceptual understanding.

In 2004, Marshall University professors Bonita Lawrence and Clayton Brooks visited the London Science Museum and saw a differential analyzer on static display.  Dr Lawrence was impressed by the educational possibilities of such a device, and created a project to begin exploring them.  The team located Dr Arthur Porter, who had created the differential analyzer at Manchester University and later moved to the United States; they were further inspired by the resulting discussions.  They also saw a working differential analyzer constructed in California by Tim Robinson:  “The magnitude of the task of building such a machine of our own literally came to life as we watched the wheels and gears turn according to the mathematics that guided them.”

The two professors and their associates created a student team and initially built a 2-integrator machine named Lizzie: see their paper, A Visual Interpretation of Dynamic Equations.  I read about the project and was intrigued enough to contact Dr Lawrence, who kindly invited me to come out and visit: I did, and was impressed with the work being done and the spirit of the students involved. At the time they were just beginning work on a 4-integrator machine, which is now complete and has been named Art, in honor of Dr Porter.  Some photographs.

(Good grief–has it been 11 years already?)

I was reminded of this work by a post at The Lexicans, in which Lex remarked that he had not done terribly well at math in high school and the first two years of college:

It was not until my junior year at the Naval Academy, when we started to do differential equations, that the light came on. Eureka! Drop a wrench from orbit, and over time it would accelerate at a determinable pace, up until the moment when it entered the atmosphere, where friction would impede the rate of acceleration at an increasingly greater rate (based on air density, interpolated over a changing altitude) and that wrench struck someone’s head at a certain velocity, that any of this applied in the real word. By then it was too late, I was too far gone, and an opportunity was lost.

I think the use of a mechanical differential analyzer would be of great assistance to many students in helping the light to come on, and also I think it would be of value in giving some understanding of differential equations and mathematical modeling to a large number of people who will never be exposed to the formal derivations studied in a normal calculus class but could still benefit from a little intuitive grasp of what it’s all about.

I hope the Marshall group is being successful in interesting high schools and other universities in the potential of these analyzers.  My guess is that it’s somewhat of an uphill battle given the too-common preferences of the educational establishment for what Michael Schrage called ‘sparkly tools.’  Of course, it would not be difficult to create a simulation of a mechanical differential analyzer that runs on a regular desktop or laptop computer, with visual effects for spinning wheels and shafts, etc…this might add ‘sparkle’, but I think it would loose much of the value.  From an article in Capacity magazine:

“What’s great about this is that students can ‘see’ different equations and the impact on variables, which represent the rates of change of the solution you are interested in,” Lawrence said. “It isn’t the same with computer simulations,” she added. Here, screwdrivers are useful.

I think there are probably a significant number of people who will learn in an environment where ‘screwdrivers are useful’ better than in a wholly digital environment, even one which is simulating an analog approach.